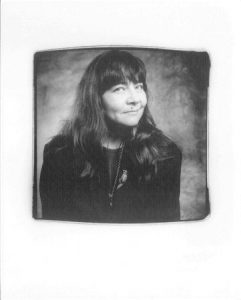 Until I read the Native American writer Leslie Marmon Silko’s essay “Landscape, History and the Pueblo Imagination,” the word “landscape” had strictly positive connotations for me. Hearing it, I imagined broad vistas of land and sky. I grew up enthralled by such vistas and still am. But Silko’s essay rang so true to me that, ever since reading it, I can’t come across the word “landscape” without questioning the way that my culture looks at the world.

Silko explains that the word, as it has come down to us, implies that “the viewer is … outside or separate from the territory he or she surveys.” “Viewers,” she continues, “are as much a part of the landscape as the boulders they stand on. There is no high mesa edge or mountain peak where one can stand and not immediately be part of all that surrounds.”

Boulders, mesas, and mountains are features of the high desert Southwest, where Silko’s Laguna Peublo people have lived for over 3,000 years. Particular examples of such land forms figure prominently in stories passed down from one Laguna generation to the next. These stories teach children that they are intertwined with the land and with everything that exists above, upon, and in it.

I also grew up feeling solidly held within the landscape of my birth. But this didn’t prevent me from moving away as soon as I graduated high school. A decade and a half later, when I returned to live in western Kansas for a while, I was shocked at the changes. Not very many farmers kept livestock anymore, and most of them, like my parents, had left their farms and moved to town. Much more of the native prairie had been plowed, and the water that had made my ancestors’ settlement possible was being used up.

Our 150 years as plainspeople is short compared to the Lagunas’ thousands of years in the desert, yet we are well on our way to drying out the streams that once watered millions of buffalo, elk, deer, and antelope and the humans who once depended on those herds for survival.

Silko explains that the images of elk and antelope that the ancients scratched or painted on stone walls focused the people’s prayers and concentration on the animals and guided the “hunter’s hand.” Similarly, the archetypal images of squash blossoms on Laguna pots, with their four symmetrical petals and four stamens, linked the images to the four cardinal directions and to, as Silko writes, “a complex system of relationships which the ancient Pueblo people maintained with each other, and with the populous natural world they lived within.” I take this to mean that they understood how critically interdependent they were with everything in their environment, and that those relationships were spiritual.

It may seem ridiculous to those of a different, or of no, religion to think that successful hunting or bountiful harvests could be elicited through ritualistic depictions of plants and animals on boulders and pots. But it would also seem ridiculous to the Laguna that we could plow under almost all of our native grasslands and pump massive amounts of groundwater without understanding that the consequences to ourselves would be severe.

And we are important, so much so that we are capable of destroying, or saving, the natural systems upon which we depend. Which it will be is up to us.