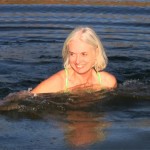 I went to Kansas in October to film a book trailer for The Ogallala Road. While there, I made some exciting discoveries and some sad ones. It was exciting to see the Republican River running higher than I’d ever witnessed.Could this be due to the immense rains received there and to the west, in Colorado, in September? Or is it because the Republican River Compact battle between Nebraska, Kansas, and Colorado resulted in Colorado shutting off water to Bonny Dam,