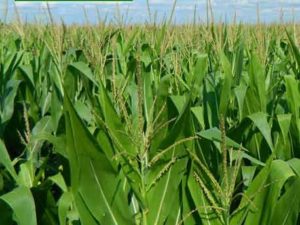 Like any farmer, my father loved driving along a wall of green corn and computing the many bushels it would yield and the money these would put into his bank account. He irrigated his corn out of the Ogallala aquifer, and always believed that the government would shut him down before he ran out of water. Meanwhile, the government was actually encouraging water use by subsidizing his corn crop through the Farm Program. In 2007, ten years after my father’s death, the federal government further intensified the aquifer’s decline by passing the Renewable Fuel Standard. The resulting demand for corn, as feedstock for ethanol, led to a drastic expansion in corn acres.

Despite many impressive new technologies, such as soil moisture sensors and variable rate sprinkler systems that can apply water only as needed, farmers are on a collision course with a fundamental disparity: Irrigated corn requires that they pump over a foot of water out of an aquifer that receives less than an inch of rain and snowmelt each year. Yet, to date, few have questioned the wisdom of growing a crop that exceeds the aquifer’s recharge rate many times over. Nor do many question the role that federal Farm Program and ethanol policies play in the aquifer’s decline.

With prices now low, and walls of dollars no longer piling up behind walls of corn, this might be a good time to open that discussion. Why does the Farm Program offer High Plains farmers revenue protection insurance on yields that can only be achieved by draining the nation’s largest aquifer? Is the Renewable Fuel Standard, which requires that ethanol be mixed with the nation’s fuel supply, ultimately good for farmers’ bottom lines? It spurred a boom that tripled corn prices and land values, but also caused a glut of corn on the market that drove corn prices back down. Land prices are sure to follow. How many farmers find themselves underwater in debt while having used up most of the water belowground?

Shouldn’t federal dollars go toward preserving national resources and promoting longevity in agriculture rather than policies that deplete reserves of soil and water and fuel a boom-and-bust ag economy? Instead of paying farmers to grow a crop that depletes the water that future generations will need, the government could pay farmers to regenerate their soil, or to return more land to grass, or to finish cattle on grass, or to water less, or to grow more drought-tolerant crops.

As long as those federal dollars continue to flow, I would think that farmers would actually prefer they be spent on keeping their soil and the water beneath it in as good a shape as possible. U. S. representatives and senators must run for election in farm country. It is up to farmers and the citizens of communities that depend on the Ogallala aquifer to tell them what they value most. Which will it be, water or corn?