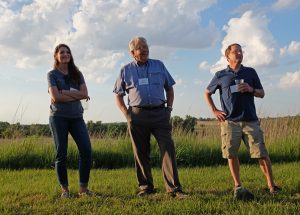 “Are We the Ones We’ve Been Waiting For?” This was the title of Wes Jackson’s speech at last year’s Prairie Festival, an event held each September at the Land Institute near Salina, Kansas. The question implies that we need to be saved. The irony is that we do, from ourselves.

Wes Jackson is a Kansas native who, like so many native sons and daughters, went away, got educated, and launched a successful career elsewhere. But Wes soon left that career to return to Kansas. Many, especially those who grew up on farms like Wes did, are called back to the land at some point. But few, if any, have ever drawn so deeply and ambitiously on what the land can teach us. With his doctoral education in plant genetics, he fashioned a new model of agriculture that seeks to mimic nature. The goal is nothing less than to feed the world with perennial grains grown together in much the same way plants interact in prairie ecosystems.

At age 83 now, Wes had to interrupt his speech several times to cough. “This is actually whisky,” he announced, lifting a Styrofoam cup to his lips. Nothing is more endearing than a down-to-earth genius, willing to poke fun at himself to get a laugh

As always, he reminded us that our future depends on observing and imitating nature rather than on attempting to “subdue and control” it. Historically, we’ve failed to recognize how completely embedded we are in the natural world. And how embedded it is, in us. We now know that the elements in our bodies, such as carbon, hydrogen, and oxygen, came to us out of the same Big Bang that created everything else. Although we share these elements with our planet and all that lives upon it, we forget that we are also animals, subject to the same natural laws as all other life. Carbon is the main building block of life, including our own. Wes likes to point out that we are not that differently motivated than bacteria in a Petri dish. They go after the nutrition, or energy-rich carbon, until it is gone, and then they die off.

The implication, of course, is that the world is our Petri dish. To circumvent our own destruction, we could use our unique and formidable intelligence to find ways to live within our natural limits and not outrun our food supply like unwitting bacteria. Instead, we use our big brains to figure out how to access the energy-rich carbon even faster. In Wes’s view, we took the first wrong turn 10,000 years ago when we opted to plow the soil and grow annual grain crops. Much more recently, we figured out how to increase crop yields with manufactured fertilizers. But these two inventions spurred population growth while depleting soil and water necessary to support that population for the long term. We also went after the carbon contained in fossil fuels, thereby spewing carbon dioxide into the atmosphere and destabilizing our climate.

Wes’s ideas never fail to ring true to me because they are rooted in the earth, and nothing is more solid, or true, than the earth. At the close of this speech, he held up a fragment of a clay irrigation tile he found when paying a visit to the eastern Kansas farmstead where he grew up – “on the back of a hoe,” he is fond of saying, cultivating crops and guiding water down irrigation ditches. The tile has sentimental value to him and now hangs on his office wall because of his history on that land.

“It all turns on affection,” Wes explained. “We have affection for each other and for our places, and we now have to think of the world as a whole.”