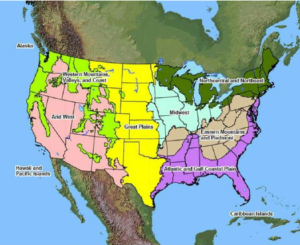 “He thought he knew what he was going to see, but now that his horse stood on the summit, he couldn’t believe. He couldn’t believe that flat could be so flat or that distance ran so far or that the sky lifted so dizzy-deep or that the world stood so empty. … He thought he never had seen the world before. He never had known distance until now. He had lived shut off by trees and hills and had thought the world was a doll’s world and distance just three hollers away and the sky no higher than a rifle shot.”

That passage from A. B. Guthrie’s novel, The Way West, describes a pioneer’s first view of the Great Plains when he reaches, what is today, central Nebraska on the Oregon Trail. I first read that book 30 years ago, as a returning student at the University of Iowa. The description stuck with me because whenever I drove the 800 miles back to my family’s farm in the Colorado-Kansas border region, I would notice the sky lifting and the earth widening about the time I reached central Kansas. With each breath of lighter, dryer air, I drew the sunny expansiveness of the Plains into my lungs and knew I was home.

On the map in my sixth grade geography book, the Great Plains region began in Texas, reached all the way to the Canadian border, and was signified by a few stalks of wheat. The Midwest, to our east, had a shock of corn, a crop that didn’t grow too well on the Plains because we were in the rain shadow of the Rocky Mountains.

Today it jars me when someone from a Plains state, especially from the dryer western half of one, refers to him or herself as a Midwesterner. When I think “Midwest,” I envision tree-lined rivers winding through bucolic hills covered in emerald green fields of corn or grass. I see church steeples poking up between the hills, which nestle hamlets of stately white houses.

Think “Plains,” on the other hand, and I see flat, treeless expanses interrupted only rarely by a modest creek or river. Tall white grain elevators overlook towns where each straight, wide, sunlit street opens onto a stretch of lime-green buffalo grass or yellow wheat. That’s in my mind. I know that today the streets often end in walls of corn. That crop has marched down off of the Iowa hills onto the Plains – an invasion enabled by government incentives combined with plainspeople’s willingness to use up their only water source, the Ogallala Aquifer, to grow a crop ill-suited for their climate.

Today we hear a lot about climate change denial. But how are we to notice and take responsibility for changes in our climate if we have not, as yet, even learned to accept and work compatibly with the climate we already have?