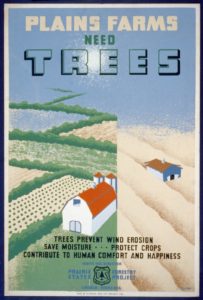 When it came time to plant a new windbreak on my family’s farm back in the 1980s, my father wanted just junipers or elms, while I wanted both of those, plus lilacs, Russian olives and plums, not in rows, but all mixed together randomly, like in a real forest. We fought over those trees the way close family members will do, as if our separate wishes were a threat to our mutual identity. He must have felt as if I were rejecting his very way of life and being, while I yearned for him to accept and share my taste for wildness

Recently, on a backpacking trip to the Sierra Nevada mountains, I kept noticing the two features I’d argued for in that windbreak all those years ago – variety and randomness. The six or seven tree species, mostly pines and firs, that towered above me hadn’t been planted according to any plan, but had sprung up wherever fate afforded them an opportunity. In some places solitary junipers had found purchase in fissures on otherwise smooth granite, while elsewhere the trail took me through groves as enchanting, dark and green as one of the mythical forests in Lord of the Rings. Because no gardener paid visits to cull or prune, some of the giants had fallen and now lay on their sides, covered in moss or drilled full of woodpecker holes, their gnarly roots as beautiful as any sculpture.

To stand in those groves among the living and dead, with a lake glimmering between the branches, hawks soaring overhead, and a beak knocking resonantly now and then in the distance, was to stand in the midst of the whole grand, operatic creation. The little forest I’d wanted to plant on our farm wouldn’t have comprised one bar in that opera, but I had craved that semblance of the wild—the randomness and variety—just the same.

As it turned out, I did get the variety. My father even consented to planting four lilacs between every pair of Russian olives in the first row. But I didn’t get the randomness. Our three-hundred trees stood at attention row by row, like soldiers. My dad liked to point out that if we’d planted them willy-nilly, as I’d wanted to, all we would have wound up with was a field of random weeds. We wouldn’t have been able to machine cultivate, or water automatically. Drip irrigation hose kinks easily. It needs to be laid straight, not in curlicues.

I wasn’t above admitting that I was wrong but there were things about which I was right too, things that my father never saw. He had a farmer’s mentality, meaning he approached nature strictly with the purpose of taming it to reap practical benefits from it. I would never have the satisfaction of sharing my love for wildness with him. Perhaps that’s one of the reasons I’m sharing it with you.