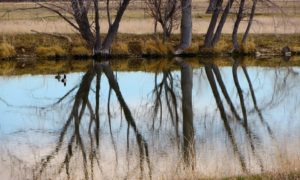 My father pastured his sheep on what could loosely be termed the “shores” of Little Beaver Creek, a dry watercourse that flowed only after gully washers – his term for big rainstorms. Today it amazes me that I could have grown up in that place and never wondered how the creek got its name. Nor did I wonder what happened to the water or the trees that beavers could not live without.

It wasn’t until decades later, while doing research for a book about the Ogallala aquifer, that I learned that both the Little and the Middle forks of the Beaver did flow further east in my Kansas county. Like most streams and rivers on the High Plains, they were spring fed. The water in them came to the surface where their beds cut through the Ogallala aquifer formation.

On my next visit home, excited at the prospect of seeing water in a creek I’d grown up knowing only as dry, I zigzagged along the section-line roads, stopping on bridges over the dry bed of the Little Beaver and peering upstream. When I finally spotted blue, I crawled through a barbed wire fence, then down into the bed and touched the water with bittersweet appreciation. Bittersweet, because I knew that large-scale irrigation, such as my own family now practiced, was drying up almost all surface water on the High Plains.

I saw this firsthand as, over the next decade, I paid regular visits to a Middle Beaver pond where one Jospeh Collier erected the first sod house in Sherman County. I couldn’t go home without driving out to stand in the shady glen the water created. Staring into dark, but clear, tannin-stained depths, I imagined the millions of people and animals the spring had sustained going all the way back into prehistory. But the pond and the length of the stream leading out of it dwindled each time I saw it.

Then, on a visit in 2014, I looked down from the bridge only for my eyes to fall on bare earth and weeds. I haven’t seen water in Collier’s Spring since, although I still can’t resist the compulsion to drive out there. That compulsion is what we call “hope” – unreasonable hope in this case, because hydrologists say that it will take thousands of years for the Ogallala to replenish itself and for the springs to flow again.

As to the creek’s namesake, by 1882, when Collier settled there, it is doubtful that any beavers still plied its waters. Fur trappers had nearly eradicated that animal everywhere in North America, to satisfy European demand for beaver pelts, which were felted and turned into hats.