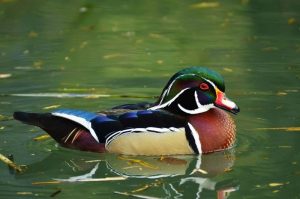 “Are we gonna go ‘splorin’ again?” Indy asked me as he climbed into his car seat.

Thursday afternoons were Grandma time, and he knew he could count on adventuring. I would pick him up from preschool and off we would go.

We found this little inlet on the Russian River, shallow enough to wade in, and spent an hour or so dipping our buckets in the water, catching minnows. Afterward, while Indy snacked on the slices of cheese and apple I’d packed, I paged through the junior bird book I’d brought along.

We’d seen plenty of mallards – the brown females and showier males. “Indy, it says here that the drakes need those bright colors to attract the females.”

I turned the page. “Look at this one.”

Indy leaned closer. “Wowww. What are they?”

“Wood ducks. Aren’t they beautiful?” The drakes had iridescent green crests. On their bodies, bold white stripes separated colors ranging from ivory to sable to blue. We learned together that the birds nest as high as fifty feet off the ground, in tree trunks. The day after the ducklings hatch, they jump from the nest.

The book assured us that their feathers break the fall. Unfazed, they waddle over and join their mothers on the water.

Indy grabbed my arm and pointed to the reeds on the other side of the inlet. “Look Grandma! I think I see one.”

Unbelievable, but sure enough. The duck in the book had materialized before our eyes. “Wow!” I whispered. “A drake.”

Indy was just four then – dimples to die for, full of exuberance and joy. Having grown up on a Kansas farm, entertaining myself outdoors for hours on end, I knew that these adventures in nature were the most important thing I could offer him. If my plan worked, nature would worm its way into his soul the way it had wormed its way into mine.

That spring day we spent in those out-of-the-way woods on the river, catching minnows in buckets, then spotting a real wood duck just after reading about wood ducks, was one of the happiest days of my life. One of the saddest came in January the following year, when Indy and his mother moved to Southern California. I had moved from Colorado to this less urbanized part of Northern California in order to be near Indy and his father, but now Indy was gone, accessible to his father and me only on rare visits.

With climate change, Indy’s opportunities to experience nature will diminish even more than they did when he moved to Southern California, where freeways are 16 and more lanes wide. But even as rivers dry up, I still want him to seek out the clear rivers that remain. I want him to wonder at the courage and faith of wood duck chicks and wood duck moms. I want him to value what is truly valuable and not be diverted from the power of the earth by the pretend power of video games, firing virtual guns at virtual aliens or “bad” guys. I want him to realize there is no “other,” that no one is alien here. We are all in this together, interwoven life, dependent on this planet, our blessed home.

As sadly happens in families from time to time, Indy’s mother and I are at odds at present, and this makes it impossible for me to visit him. When adults let things like this happen, we are accused of acting like children, but children are open and forgiving. No, we are acting all too much like adults. Although I think of little else, I can’t come up with a way to mend this rift. All I can do is pray. I pray that Indy will remember me of course, but more importantly, I pray that he’ll remember all those beaches, forests, islands, mountains, and streams I took him to. I want him to remember that he can turn to nature, even on his saddest days.