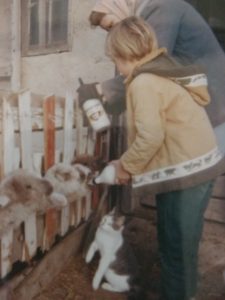 My mother used to tell a story about a dog that our family had before I was born. She swore he could read her mind. “’Elmer, ‘ I said to him one time, “why don’t you get me that chicken?’ I didn’t even point. But danged if he didn’t go over and grab me the chicken I’d been thinking about.”

Mom also liked to recall the time she placed duck eggs into the nest of a mother hen. “Well,” she said, “when they hatched and got a little older, they slipped through the fence and went swimming in the pond. Oh did that hen have a conniption.” Then there was a giant “pet” toad, who used to sit on the porch step summer evenings with her and her family, to gorge on the June bugs that flocked to the light coming through the screen door.

I grew up on that same farm, surrounded by barks, meows, oinks, clucks, neighs, moos, and, since my father had gone big time into the sheep business, lots and lots of baas. Each of those sheep had its own voice – some high, some low, some scratchy, some clear. Each was a unique individual, like all of the animals on the farm.

Take Cat-tastrophe, for instance, a yellow tiger cat who was always getting into fixes. Once he fell into a ten-foot-tall concrete storage tank in the well house. He yowled for days until he finally figured out that he could climb out on the strips of old sheets we’d tied together for him. Or take Flopsy, our corpulent black terrier mix named for her long floppy ears. After losing a litter of pups, she adopted and nursed a kitten we called Freak because its mother had rejected it. Then we had Joe the Crow, who would sit on the clothesline and swoop down to scare off any cats who tried to eat from the bowl he considered his.

By the time I started grade school, I’d already had an education in the ways of many wild members of the animal kingdom – not only from Joe the Crow, but from the hog snakes, garter snakes, doves, pigeons, burrowing owls, raccoons, toads, lizards, salamanders, cottontails, jack rabbits, and box turtles that we’d captured and tamed. Such intimacy with animals was a large part of what it meant, in my childhood and my mother’s, to grow up on a farm.

Then, when I was sixteen, my parents traded that farm for land near another farmstead they owned and built a new house in town. They either sold or moved all of the remaining animals to the other farm. Mom didn’t want to deal with cat hair in the flawless new house, so not even our house cat moved with us. Only years later would I look back and realize that, in giving up a life surrounded by so many animals, we’d also given up our way of life.