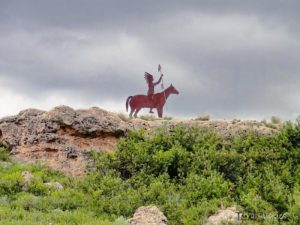 “Your grandparents started out right over there,” Tobe Zweygardt said, pointing to a farmed hillside in the distance. It amazed me how much information Tobe, an elderly retired farmer, stored under that billed cap he wore. I knew my father had spent his early childhood in Cheyenne County, but until then hadn’t known where.

The terrain along Cherry Creek was what my father used to refer to as desert “scrub,” the kind of land I loved—all jutting boulders, cactus and yucca—and that he had no use for, because it wasn’t arable. Groundwater irrigation on flatter land to the west had reduced the flow to a mere trickle, but the creek once had enough water to sustain 3,000 Cheyenne, Arapaho, and Sioux through the winter of 1864 to 1865.

On the bluff above us, Tobe had placed one of his iron silhouettes, this one a life-sized mounted Indian holding his lance erect. After the massacre of 160 to 200 peaceful Cheyenne and Arapaho at Sand Creek, Colorado, the war pipe had been passed among the plains tribes. They had gathered here to prepare for war. As one Cheyenne chief, Leg-in-the-Water, put it “The white man has taken our country, killed our game; was not satisfied with that, but killed our wives and children. … We have now raised the battle-axe unto death.”

“I brought you a copy of that list Mr. Sipes gave me,” Tobe said, reaching into his pocket and pulling out a folded sheet of paper. My eyes drifted down the names of the 95 refugees who had made the trek from Sand Creek. Names like Roman Nose Spotted Horse, born 1860. He would have been only four in 1864. Sage Woman, born 1855, would have been nine.

“Mr. Sipes could point to where each clan had camped,” Tobe said, jabbing his own finger toward spots up and down the creek. John Sipes, a Southern Cheyenne man who had come to see where his grandparents had gone after surviving the massacre, had known all of that just from stories handed down to him! And on the day before, I’d driven right past our old farmstead on the Sherman-Cheyenne County line without even recognizing it. I’d been taking back roads, soaking up more Indian history from the markers Tobe had erected than I’d learned in school. I only realized where I was when I came to a familiar bridge over the dry bed of the Middle Beaver. A map of the Sand Creek refugees’ route to Cherry Creek showed them crossing the Middle Beaver near that spot. It excited me to think that, continuing north, they might have passed over the land that would become our farm+.

Now, I gazed at the hill where my father had been born. Many Cheyenne had died fighting to keep this land. And we had sold our farm and moved away of our own free will. Was that why I had such an insatiable appetite for Indian history? It seemed to be filling in the connections to the land that we had ourselves erased. Connections that I needed in order to feel whole.