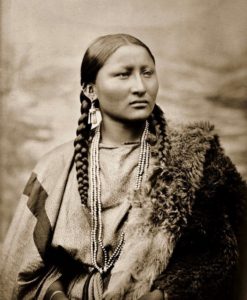 When we were kids, my brother Bruce had a knack for finding arrowheads on the pasture hills surrounding our family’s farm. Once, he even found a point resting in the grass at the base of a neighbor’s light pole. I would drag sharp edges of flint of chert against my palm and imagine braves racing bareback over our once unfenced pastures. But despite the fact that these artifacts practically littered the ground beneath my feet, I grew up ignorant of Indian history. I didn’t know that many of the battles I’d seen on TV and at the movies, between cowboys, or cavalry, and Indians had taken place right in the Kansas-Colorado border region where we lived.

“A plains state without Indians is a dull blade,” the North Dakota historian, Clay Jenkinson, has written. He describes a sense of compelling edginess in Nebraska and the Dakotas, where there are large reservations. I think I understand what he means. Because no descendents of the people who camped and hunted on the land before we laid claim to it attended my school or lived anywhere nearby, I never had the benefit of their resentment. I say “benefit” because if I’d understood that rights to the land I lived on had been fiercely contested, I could not have helped interrogating my own relationship with it—something I did come to do but at a much later age.

I don’t even remember learning, as a child, that the county I lived in had been named after the commanding general in the Plains Indian Wars. Only as an adult did I read about General William T. Sherman’s “final solution of the Indian problem,” as he called it, which was to kill as many Indians as possible and exile the remainder. He ordered troops to attack villages in winter, so that more men, women, and children could be killed, and to destroy their livestock so that survivors would starve. To the same end, he encouraged the extermination of what remained of the estimated 40 million bison that once roamed the plains.

Being a member of a family that ultimately profited from the questionable and often criminal treatment of the natives doesn’t make me responsible for those practices. My ancestors and others who seized the opportunity for a better future in once-Indian lands can’t be blamed either. Government policies underwrote their entitlement to all that would yield a profit—whether roads or railroads through native hunting grounds, gold, or rich farm land. But I do think that those of us who occupy once Indian lands should at least learn how that land came into our possession. We can acknowledge the often brutal history and we can teach as true and objective a version of it as possible to the younger generations. We can inform ourselves and pray that, through knowledge and the expanded empathy that knowledge brings, we will find the courage to speak up for the rights of the natives who do remain and for the heath of the land itself, so that those who come after us can also call it home.