I went to Kansas in October to film a book trailer for The Ogallala Road. While there, I made some exciting discoveries and some sad ones. It was exciting to see the Republican River running higher than I’d ever witnessed.Could this be due to the immense rains received there and to the west, in Colorado, in September? Or is it because the Republican River Compact battle between Nebraska, Kansas, and Colorado resulted in Colorado shutting off water to Bonny Dam, a reservoir on the Colorado side of the border? (Here’s a handy thumbnail history of this battle, which proves the old western saying that “whiskey is for drinkin’ and water for fightin’.”) Whichever it was, I delighted in the water, as you can see. 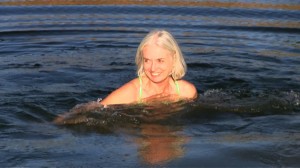 When water gifts itself in this way, it is something to be thankful for and treasure. How could we forget this? But that’s exactly what has happened. People in Kansas and throughout the High Plains have become accustomed to thinking of this once beautiful land as mere farm ground and nature as servant to their monetary needs. This utilitarian view has caused them to pump the water from under that ground and forget the thrill of seeing it come to the surface “of its own accord,” a phrase from a definition I once read of a spring.

There is nothing more personal than a dive into a lake or river. It is like entering a lover’s full embrace, and in this case it was also very bracing. Nature has always been very personal for me—ever since I was a tiny child enchanted by wide skies and broad prairies.

How do we restore natural beauty to the prominent place it merits in the hearts of the land’s inhabitants? My answer was to write a book spilling my heart out—a book that made little distinction between what was “out there” and “in here,” because the two landscapes, outer and inner, are intertwined for those of us who were thoroughly imprinted by the earth’s beauty as children. It has been my good fortune to have those child memories amplified by my rambles through western deserts and mountains, and, yes, by a thousand dives into the waters nature gifts us.

For this reason, it was especially sad, in October, to visit Big Springs, the site on Middle Beaver Creek where Sherman County’s first settlers lived and where the Cheyenne Indians used to hold sun dances. As I say in the book  trailer I’ve been working on, there would be three or four thousand Indians at these dances, and horses in at least four or five times that number. Imagine how much Ogallala water must have come to the surface “of its own accord” to make those gatherings possible. I visited Big Springs about ten years ago, with Ward, the man I met when I first began researching my book and who became a central figure in the story. At that time, the spring was already much diminished, but it looked to be at least as deep as my chest. (This was one of the few times that I didn’t go into the water.) This is what Big Springs looked like in October: 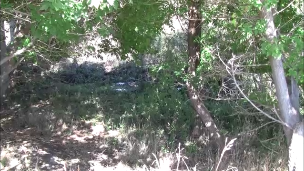 What Was Once Big Springs

We can blame this travesty on both the severe drought of 2011-2012 and on irrigation, which draws the water table down so far that the water no longer seeps into the creek beds. Those are the immediate causes. But more than this, we must look to our own failure to understand who we are as a people and our forgetfulness of what gives us not only life, but joy. Could we change this pattern? Those of us who recognize it have no choice but to try.