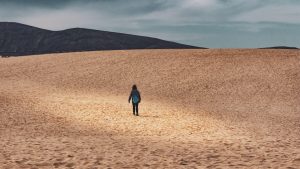 One of the most heartbreaking essays I ever read was by Alice Walker, about a lonely horse named Blue. One joyful day, a mare arrived to share his pasture, and Blue entered a brief period of bliss. A few months later, after a trailer came and carried Blue’s best friend away, he galloped “furiously” around and around his pasture, “whinnied until he couldn’t,” and “tore at the ground with his hooves.” He was so distracted by grief that he wouldn’t even take the apples Walker offered him anymore.

Horses aren’t the only ones whose hearts ache when they are cut off from their own kind. I’m sure many people have suffered pangs of loneliness while sheltering in place during this COVID-19 crisis. For some, the emotion may have come as quite a shock.

I say this because I remember that my first serious encounter with loneliness, at 26 and recently divorced, shocked me. Accustomed to working in the busy office of an audio studio  that my husband and I had owned, I now worked alone as a bookkeeper and returned to my empty house each evening as the fog rolled in, turning San Francisco gray. I’d never lived alone before. The unbearable panic that arose in me felt like it was being generated by an internal enemy.

Having grown up on the western Plains, I bought into the western mythology of the entirely self-reliant individual. Loneliness seemed like a weakness to me, so I set out to defeat it.

I’d been on many camping trips in the Mojave Desert. I loved its craggy mountain ranges, the exhilarating smell of sage, how quiet it was and how reliably sunny, especially after years San Francisco fog. It seemed the perfect place to wage my battle. Today it strikes me as a little more than odd – crazy perhaps? – that I had enough courage to live alone in rugged desert mountains but was afraid to pick up the phone and ask someone to lunch or dinner.

As you probably guessed, I failed miserably at overcoming loneliness. While I never tired of the desert’s dramatic beauty, inside, I was still running up and down a fence line constructed of my own social ineptitude. As much a herd animal as Blue, I needed a friend.

For the first couple of months, the only people I interacted with were store clerks when I drove to town for supplies. But gradually, humans began emerging from canyons and crags. The foreman of a nearby ranch arrived “to see if I needed anything,” he said, but I think he was really checking up on my safety. My nearest neighbor, from two miles down the road, came to tell me I might want to move my trailer off the hill, lest it topple in a windstorm. A hermit couple dropped in on their way to town to ask if I wanted them to get me anything. A gifted, idiosyncratic artist who lived in a rock hovel suitable for a gnome liked to share his work and thoughts. Soon, I started getting invitations to potlucks and roundups on ranches. Most importantly, I learned that there was no shame in hanging out to chat after picking up a few items at the general store 25 miles away. All the desert dwellers did that.

That I had to move to a sparsely inhabited desert to learn that loneliness is not a weakness might seem ironic, but it actually makes perfect sense. People were like diamonds there, rare and hard to come by. Therefore, they valued one another.

Just as hunger tells us, “Eat!” loneliness tells us, “Connect!” That is difficult now. Being physically close to others can be dangerous. But there are ways. We just need the courage to pick up the phone, attend a ZOOM meeting, or stop on a walk and chat with a neighbor at a safe distance.

As humans, most of us are very lucky. We have options that Blue didn’t.