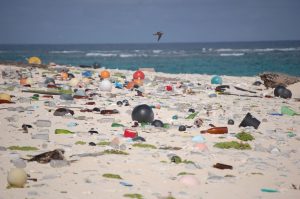 “Malaysia to Send 3000 Tonnes of Plastic Waste Back to Countries of Origin.” So read a recent headline. Apparently, the Malaysians are tired of being a dumping ground for the world’s trash. They are not alone. China, which used to take 70 percent of the hardest to recycle plastic, is refusing it now too.

Imagining all that plastic junk being dumped back on the countries it came from reminds me of a science fiction story I read as a teenager. “Dusty Zebra,” by Clifford D. Simak, was about a guy who had discovered a magic portal into another dimension. The portal appeared to be nothing more than a dot on the top of his desk. But whenever he set something there it vanished, soon to be replaced with a mysterious object from that other realm. One of these objects made dust disappear.

Soon a deal was struck. The earthling had no idea what his trading partner did with the thousands of tiny zebra-shaped trinkets he sent through the portal, but he charged a handsome price for the thousands of dust removers he got in exchange. He became rich, never stopping to think what might be happening to the vanishing dust. Not, that is, until it all came back to Earth, in one big dump.

“Here’s your cussed dust,” whoever sent it back seemed to be saying. “We don’t want it!” It was a well-deserved comeuppance, a joke on us. The implied commentary seemed profound to me even at age thirteen, and that was before we’d fully embraced the notion of throw-away plastics. There were no disposable lighters, no Styrofoam or clamshell containers meant to be tossed as soon as their contents were consumed.

The “big lie about plastic,” as one LA Times commentator wrote, “is that you can throw it away. … [T]hat’s not true; there is no ‘away.’” All of the plastic refuse we have been tossing is coming back to haunt us now, just as the dust came back in Simak’s story. I have seen Caribbean beaches littered in plastic refuse from their shorelines back into adjacent palm forests– a depressing sight to say the least, a real downer when you thought you were visiting paradise.

The hardest to watch 60 Minutes episode I ever saw was about albatrosses on Midway Atoll, a U.S. Territory in the Hawaiian Island chain. I marveled to see the beautiful birds engaging in a courtship ritual as graceful and elaborate as ballet. But the albatrosses have been dying in huge numbers. It sickened me to discover why. Autopsies on the birds reveal stomachs stuffed full of fragments of broken plastic. By 2050, scientists now predict, there will be more plastic, by weight, in the oceans than fish.

Even though it takes plastic over 400 years to decompose, it sheds tiny micro-particles all along the way. These appear in the milk babies drink from plastic bottles, in bottled water, in the fish we eat, in our air. The toxins in plastic are suspected of causing cancer, birth defects, immune and endocrine system issues, and developmental issues in children.

New types of biodegradable plastics need to be further developed. Until then, manufacturers should be required to source only plastics that can be recycled easily and more than once, we shouldn’t be using plastic containers for food or beverages, plastic bags should not be available in stores, and curbside recycling should be available everywhere – not just in a few big cities. We can all advocate for these and other changes, but most importantly we need to change our own mentality. We buy water in plastic bottles, carry goods home in plastic bags, and accept Styrofoam containers for take-home leftovers, then throw them all away only at our own peril.