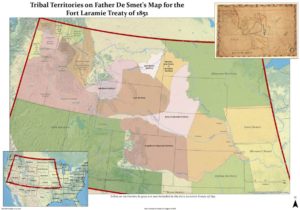 I’m not sure why this never dawned on me when I was a kid, but not until well into my adulthood did I put two and two together and realize that Cheyenne County, just north of our Kansas farm, was—duh!—named after the tribe that used to live there. Indeed, the 1851 Horse Creek treaty, signed at Fort Laramie, Wyoming, had granted the Cheyenne and their allies, the Arapaho, the land where I grew up, along with all the land west from there into the Rocky Mountains.

And when my family visited Smoky Gardens, a little reservoir on the Smoky Hill River south of my hometown, Goodland, I had no idea we were picnicking just a half day’s horseback ride downriver from Big Timbers, the favorite campsite of a famous Cheyenne warrior society, the Dog Soldiers. I don’t recall learning much about the Pike’s Peak Gold Rush either, which began in 1859. According to the historian Donald J. Berthrong, less than half of the estimated 100,000 ‘59ers ever reached the gold fields. Instead they began to “inundate the lands of the Cheyenne and Arapaho.” To defend their buffalo hunting grounds, the Dog Soldiers and other warriors raided the new settlements, and were attacked in turn. Did my textbooks leave all this stuff out? If not, how was it I failed to realize I was growing up in a place where the Plains Indian Wars once raged?

Frequently in frontier days, the invading culture would sign one treaty then notice something it wanted—gold, or good farm land, or a railroad through prime hunting grounds—and draw up a new one. Accordingly, in 1861, the Treaty of Fort Wise sought to force the Cheyenne and Arapaho onto a tiny southeastern Colorado reservation one-thirteenth the size of the lands ceded to them in the Horse Creek Treaty. Like the majority of their tribesmen, the Dog Soldiers refused to sign and didn’t honor the new boundaries.

As hostilities between Indians and settlers intensified, Colorado governor John Evans ordered all “friendly” Indians in the region to report to military posts or be subject to attack. Peace chiefs Black Kettle of the Cheyenne and Niwot of the Arapaho, along with 750 followers, mostly women and children, set up a village on Sand Creek, near Fort Lyon. Evans assured them they would be safe there.

Of all the history I didn’t learn while growing up, my ignorance about what happened at that Sand Creek encampment on November 29, 1864 troubles me most. I learned about it only later in adulthood when I began to wonder about the people who had lived in the region I called home before me.

The history is better known today, but if, like me, you grew up uninformed about it and haven’t filled in the blanks since, I encourage you to type these words into your browser: “Sand Creek 1864.” Even though the facts themselves are very dark, the only way to vanquish darkness is to open a curtain or turn on a light.

I will share more of what I’ve learned next week.