“Our Turn at this Earth” is broadcast Thursdays at 6:44 pm on HPPR radio. 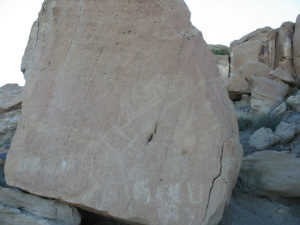 According to legends passed down from generation to generation among the Hopi Indians, humanity has occupied three previous worlds, each of which was destroyed because we failed to honor the instructions of our creator. I learned about this myth from a man named James, a Hopi farmer whose family I stayed with during a 1980s visit to Hotevilla, the most traditional Hopi village.

James explained to me that his people are grateful that in this, the fourth world, they live in a desert. Desert life helps keep the Hopi mindful of their limits and encourages them to stay in balance with nature. The desert, he indicated, is like a strict mother who doesn’t let her children step far out of line. She provides the necessities, but only if crops are carefully tended and water, the greatest gift of life, is carefully preserved.

Lest the Hopi forget this basic fact of desert life, they have prophecy rock—a sandstone boulder into which their ancestors carved two horizontal, parallel lines. On the upper line stand four human stick figures who, according to James’s interpretation, indicate the way of the white man, who values material goods over a simple life in keeping with nature. To the right of the final figure, the line zigzags off into space.

On the far end of the lower line is another stick figure, this one tending corn, as the Hopi had done for over a thousand years. This line does not break off but continues on around the edge of the rock. James and the other elders in Hotevilla could read the writing on the wall. They tried to teach the young people in the village to stay on this more righteous path.

My people take pride in our rationality. We do not make decisions based on ancient prophesies, but on observable facts—hard data gathered scientifically. But today science has given us our own writing on the wall, and it is telling us the same thing the Hopi’s prophecy tells them—that if we continue upsetting the balance of nature, we will come to ruin. On the High Plains, where, for decades, farmers have been withdrawing much more water from the Ogallala Aquifer than what returns to it through natural recharge, charts generated by land grant university scientists and the U. S. Geological Survey tell us that the water will soon be gone. The measures being taken in response to these reliable prophesies that meet even our exacting standards for truth are minor. They may slow the depletion of the aquifer, but not by much.

It seems strange, does it not, that we know more about nature than any society ever has, yet we choose to ignore that knowledge, thus endangering our own and all of nature’s future? Unlike the Hopi, our living in a very dry place did not humble us or encourage us to stay within our natural limits. For that, we would have needed a spiritual tradition that recognizes our kinship with all of nature, of which we are only a small part.