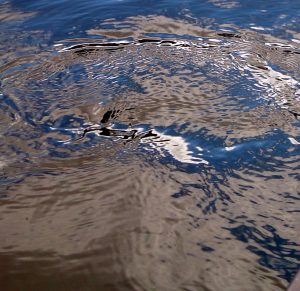 Almost all of the watercourses on the High Plains are fed by the Ogallala aquifer. Each one of them creates its own paradise. Red-winged blackbirds trill from their perches atop tall reeds. Deer, pheasants, wild turkeys, and other wildlife wend through thick meadow grasses. Cottonwood and hackberry trees shade the water, which is usually so clear you can see fish swimming in it. In the journal of his 1843 expedition through the High Plains, the explorer John C. Fremont described one such place as a “birded glen.” Standing in one of those lush, verdant meadows, looking through the trunks of trees onto hot, dry hillsides that rise above them, always brings home to me the fact that water is indeed the source of all life.

This is evident on the semi-arid High Plains, but even more so in the desert Southwest, and that is probably why many of the native desert people describe humanity first emerging onto the surface of the earth through a spring. In the Laguna Pueblo myth, the people couldn’t reach the surface until an antelope butted a hole onto it and a badger clawed the hole wider.

The Laguna author Leslie Marmon Silko explains that the myth is not meant to be taken literally, but metaphorically. As she puts it, “Life on the high arid plateau became viable when the human beings were able to imagine themselves as sisters and brothers to the badger, antelope, clay, yucca, and sun. … Only then could they become a culture whose survival remained stable despite the vicissitudes of climate and terrain.”

“Stable” is a key word in Silko’s explanation. That the Pueblo cultures and their ancestors have survived in the desert for thousands of years proves the wisdom of their spiritual worldview, which recognizes their kinship and interdependence with everything in their environment.

By contrast, my people, rather than tracing our identity and survival to the natural world, tend to see ourselves as autonomous individuals who must master and subdue nature in order to survive. That is why, only a century and a half after pioneers settled on the High Plains, most of those birded glens that Fremont so beautifully described no longer exist. It is why the groundwater under agricultural land is drying up, and why most of the prairie grasses and the complex systems of interrelated animal and plant life that greeted us on our arrival are now gone.

Anthropologists believe that the Pueblo People descended from the paleo-Indians who hunted and gathered in the desert Southwest during the ice ages. Evidence of their ancient presence can be seen in the images of bighorn sheep, antelope, birds and hunters that they carved into sandstone walls.

My people’s arrived on the plains much more recently. While our survival depends just as much on water as the Pueblo People’s survival does, we don’t trace our origins to the spring-fed streams where the first settlers homesteaded, nor to the aquifer that fed those streams and that our windmills pumped, but to Europe, a far off land that few of us have ever seen. In this sense, we are like orphans, disconnected from our life source and largely unaware of our kinship with all of the other animals and plants that owe their existence to the same water.

But unlike the mothers of orphan children, ours did not pass away, although we do put her in danger by failing to recognize our connection to her. This is a situation that can be corrected. All we have to do is open our eyes. We see her each time we turn on a faucet. She nurtures us each time we take a drink.