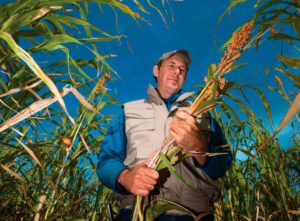 Over the past few weeks I’ve been talking a lot about regenerative farming techniques. “But could they work where I’m from?” I kept wondering. In order to find out, I spoke with Michael Thompson, a sixth generation farmer from Norton County, Kansas, who grew up thinking, like I did, that wheat ground had to be fallowed every other year and kept bare to accumulate moisture for the next crop.

To consider planting cover crops on fallow ground in our part of the country would have been greeted as heresy. But Michael explained that, after close to a century of tillage, his family’s soil had become a “degraded resource.” With only one percent organic matter left, it had next to no water-holding capacity. He knew that unless he became what he called a “soil detective” and figured out how to heal his soil, the farm would not be able to support him and his family in addition to his parents.

He began by adopting no-till practices, which meant leaving crop residue on the fields, planting back into it, and killing weeds with herbicides. But this approach by itself didn’t improve soil health as much as Michael hoped it would. Nor did the bottom line on the Thompsons’ 4,000 acres of crop and rangeland improve much.

So he tried incorporating cover crop mixes with no-till, which proved far more successful. Employing a rotational grazing system, the Thompsons now run cattle on the cover crops they plant between cash harvests. Because covers keep the ground cooler and leave much more residue than no-till did, organic matter has more than doubled, and even tripled in some fields, with corresponding increases in the soil’s water-holding capacity. Deep-rooted covers such as daikon radish have broken up the pan layers in the soil, allowing cash-crop roots to reach further down into the soil profile. Because weeds can’t compete with covers, fewer herbicides are needed. Consequently, fungi can thrive, supplying water and nutrients to plants through finer spaces than roots can penetrate.

The soil detective can explain in detail how cover crops recycle nutrients too. But suffice it to say that Michael saves many thousands on fertilizers and herbicides, and has made many thousands on the additional cattle the system enables, and on better yields. It is hard to imagine any High Plains farmer not getting excited about the improvements to Michael’s bottom line, or on hearing about the 58 bushel dry-land corn crop he grew on just seven inches of rain during the 2012 drought.

But the real payoff, Michael says, will come years down the pike, when his children inherit the farm. As he told one of his other interviewers, “We’re trying to leave the land in at least as good a shape if not better shape than what we found it in.” Don’t all farmers want to do that? The groundwork that Michael and other regenerative pioneers have laid puts that goal within everyone’s reach.