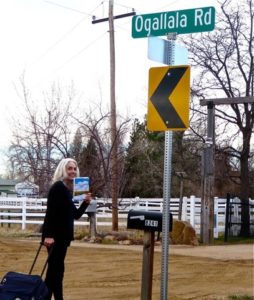 I’m the kind of person who can’t resist a country road. I’ll be zipping down the interstate between somewhere big and somewhere else big, and a narrow track winding between pale buffalo grass pastures will catch my eye. Next thing I know, the interstate is fading into the distance in my rear-view mirror, as I follow my nose into the next county.

Given my penchant for such side trips, it amazed me that I’d lived in a development outside Longmont, Colorado for over six years before noticing the gravel road across from the big fancy horse ranch. I have to wonder if some mysterious force in the universe – the god of coincidences, say – had reserved that one for the right, most teachable moment.

I had recently finished an as-yet untitled book about the Ogallala aquifer, the water under most of the Great Plains, including my family’s Kansas farm. Ever since the 1980s when I had farmed with my father for awhile I’d been troubled by the threat that irrigation agriculture posed to the aquifer, which was declining rapidly. Satisfied that I’d said all I could on that topic, and eager to focus on something new, I had spent the morning before this particular drive making notes and flirting with other potential writing ideas.

So I’m on my way into town, and suddenly there’s a green road sign that, for some arcane reason, had never caught my eye before. “55th Street,” it said. Although houses were far between in that part of the county, and the so-called street was unpaved, I figured I could follow it until I came to a crossroad that would take me to town. Only after I’d gone over a couple of hills and around a few bends and I’d started to feel a little lost did that other road finally appear. I squinted as the words on its green sign came into view.

Why a road in a Front Range county over a hundred miles west of the Ogallala aquifer would be called “Ogallala Road” I did not know. The Oglala Sioux tribe, from whom the aquifer indirectly got its name, had not frequented that area much. But that sign was “a sign.” As of that moment, I knew what my book title would be. And I knew that my concern for the aquifer ran too deep to allow me to leave the Ogallala Road in my writing any time soon.

Today’s broadcast marks the conclusion of one year of weekly commentaries I’ve done for High Plains Public Radio. Many have been pleas for the preservation of the water that made my life possible, and all life possible on the High Plains for many thousands of years. I am going to take a break for a few months. In the meantime, the station will re-broadcast some of the earlier ones. I hope you’ll be listening next spring, when we’ll continue our journey together down the Ogallala Road.