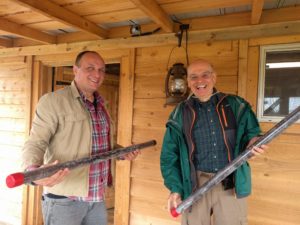 By lucky coincidence, my visit this May to the North Dakota farm of the remarkable soil health advocate Gabe Brown corresponded with a study being led by two other remarkable men. One of them was Abe Collins, who has spent most of his life raising cattle and sheep. He is now mapping the soils on regenerative farms such as Gabe’s, hoping to create what he calls a “translation utility.” Given information provided by this utility, cities and taxpayers could pay farmers for environmental outcomes such as flood control and groundwater recharge. To this end, he launched a company called LandStream and the current ambitious study, budgeted at $600,000 for the first year.

He held up a four-foot tube containing a core sample taken that morning. He showed me how just inserting the tube had pressed all of the soil down into the bottom half. Abe’s colleague, Dr. John Norman, said he’d never seen a core compress by a factor of two.

“And that’s over fifty years,” Abe put in. Now retired, John had spent most of those years developing soil measurement systems at the Universities of Nebraska and Wisconsin. Soils are naturally about fifty percent voids, he explained, but on conventional farms, repeated tillage and chemical applications reduce the organic matter, causing the soil to lose its porosity. In response, John explained, farmers try to do with tillage “what nature would do on its own if left alone. … microfauna and mezofuana burrowing in, making spaces in there, then decaying.”

The high percentage of pore space they were seeing on Gabe’s farm demonstrated not only that his soil could store every drop of rain that fell but, as Abe explained, anyone who farmed in this way was providing flood control and groundwater restoration services to the community.

As one example of the marketable outcomes of regenerative farming, Gabe Brown cited Ohio farmer David Brandt’s work with the city of Columbus when it was having problems with nitrate pollution in its drinking water. Brandt convinced the city to pay farmers upstream to plant cover crops, which prevented nutrient runoff, thereby allowing the city to avoid building an expensive new treatment plant.

Carbon sequestration is another outcome that could prove lucrative to regenerative farmers. Conventional tillage exposes carbon stored in the soil, returning it to the atmosphere as carbon dioxide. Regenerative farming, on the other hand, leaves the soil intact and increases organic matter, thereby increasing the soil’s carbon-holding capacity.

All great, except, as Abe said, “Our entire social and economic structure is missing a feedback loop allowing us to read the land.” If such information were readily available, we could adjust our policies and economics accordingly. That missing loop is what he hopes to fix.