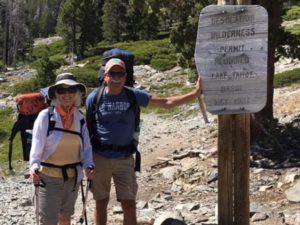 Last month, my partner and I, having become mutually deluded, decided to go backpacking in the Sierra Nevada Mountains. Al had done this many times as a younger man. Now 67, he likes to remind me that he is two whole years my junior. I had only backpacked a few times in that long life of mine, but with visions of diving into blue mountain lakes, I thought that a three-mile jaunt into the Sierras should be no problem.

Perhaps the fact that we nearly toppled over while putting on our packs should have given us pause. But intrepid fools that we are, we started up the trail and didn’t look back. By the time the enticingly blue waters of Lake of the Woods came into view, we were barely able to take another step. We still had a half mile to go, all of it down a steep hill. As I limped along, my right hip threatening to give way, I didn’t dare ask out loud the question lodged in my mind. “How will I ever get out of here?”

And yet, I couldn’t resist the lake’s siren call. Not long after dropping my pack in our campsite and falling on top of it I found myself barely upright again, inching across slippery rocks into the water. I delighted in that swim just as much as I remembered doing when I last visited the High Sierras as an agile twenty-six year old. As I dripped dry in the late afternoon sun, the only visible sign I saw of other humans was an orange tent among boulders on the far shore. In the nearer distance, a tiny dot of a duck trailed a vee across the mountain range mirrored in the lake’s surface. A frog leapt, drawing my vision onto the bank, where a western sugar pine tree rose above me, its bark as symmetrical as the scales of a lizard. I found that tree stunningly beautiful.

The words of John Norman, a soil scientist I’d interviewed recently, came to mind. “It’s like it’s taking care of you,” he’d said, describing how he felt wandering on a wild prairie. I wasn’t kidding myself. My hip still ached, and I really didn’t know how I was going to get out of that place. But John hadn’t meant that we could venture in the wild without incurring risk. What he meant was that nature takes care of our spirits, which crave natural beauty as much as our bodies crave food.

After a couple of careful days nursing our ailing joints and staying closer to camp than either of us wanted, Al and I climbed out of that valley with ease. What we couldn’t believe was the two and a half miles of rock-strewn trail we’d climbed on our way in. We’d run the risk of injury just for a taste of wildness. Old fools that we still were, we no sooner reached the car than we began planning our next trip.