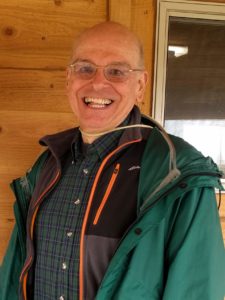 This May, when I paid a visit to the North Dakota farm of the well-known Soil Health advocate, Gabe Brown, I felt particularly blessed to take part in a conversation with the insightful soil scientist, John Norman. Although he retired some time ago from university teaching and research, John had agreed to oversee a study of the soils on Gabe’s farm.

He was motivated in this research by his understanding of prairies and the soils beneath them as living systems. “When we moved onto this continent,” he said, “we could pick and choose and rip stuff apart and it was so beautifully put together by nature that we thought it was an infinite resource. Well now we know that it’s not.” A system, he explained, is like a spider’s web. Pulling one filament affects the entire web. He argued that we can no longer afford to think of farmers as “separate entities” or of cities as separate from the ecology that surrounds and supports them. “If we don’t change our mindset,” John continued, “we’re going to extinguish ourselves.”

Gradually, listening to John, I realized that I was in the company of a scientist who had all of the technical knowledge one could acquire on the subject of soil, yet who also took a spiritual view of the human relationship with land. He described the hours he spent doing research on a prairie tract near Lincoln, Nebraska that’s never been tilled. “Its’ never had houses or roads or anything on it that anyone knows of, ever,” he said. “It’s a big prairie, not just a little remnant someplace that’s a postage stamp, but a big area – and it just infuses your being. When you step on that soil, it’s like it’s holy.”

Thrilled to be talking with someone who feels as moved as I do by prairie vastness, I asked, “Were there many people like you at UNL?”

“I wasn’t like me at UNL,” John said, explaining that scientists, rather than being systems thinkers, are “…single variable people. They think of one thing at a time. Only one thing. And they try to convince themselves they’re holding everything else constant. But you can’t hold anything constant in the real world.”

“Academia,” he said, “runs on money like everything else in our society. … That’s why in agriculture, everything’s about the yield. The quality often goes this way,” he said, pointing his thumb down. He then pointed it up. “While the yield goes that way.”

I told John how encouraged I’d been to see the excitement on the faces of farmers in the Soil Health movement videos online. I said, “I think in the soul of every farmer there is this desire to be connected to the soil.”

“It’s in the soul of every person,” John said, “but the problem is they aren’t listening to their souls.”