“Our Turn at this Earth” airs every Thursday evening
at 6:44 pm CT on KANZ (High Plains Public Radio). 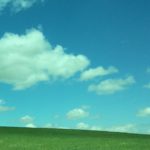 “I grew up on the mild-green, short-tufted buffalo grass prairies of northwestern Kansas.” That is the first sentence in my first book, One Degree West. Not all people define themselves by their childhood past, but still today, if asked to explain who I am, I would begin there—on that western Kansas farm, under a broad sky on the dry sunlit plains, in a family who never had to question who we were, because we were directly connected to the source of our identity. Today, all that is left to prove my family once existed in that place are bits of broken china scattered over the ground in a circle of irrigated corn. Yet it never ceases to amaze me that I’m as closely identified with that farm as if we’d never left it.

There are, of course, many other things I could say about myself. I’m a writer. I love swimming in cold, clear wilderness lakes. I love camping in remote, rugged western places. I’m a mother and grandmother. Nothing relaxes me more than digging in my garden. But all of these things about me derive from that Kansas past. When I write, I write about the High Plains. Water draws me to it because I grew up in that dry place, where the water our lives depended on lay deep underground, unseen. The wilderness draws me because we had enough pastureland for me to imagine the prairie rolling as it once did, untilled all the way to the circular horizon. I parent and grandparent much the way my parents did, according to the values I learned from growing up in that grandly beautiful but also harsh and demanding place. I garden because my parents did and because, psychically, I’m still rooted in the soil of home I visualize my family having sprouted out of that soil like the giant locust tree whose seed pods I used to reach over our house’s second story balcony rail to pluck. My parents, older brothers and I were one with the place.

The title for this series, “Our Turn at this Earth,” comes from Pearl S. Buck’s classic, The Good Earth, about another farm family, in pre-World War I China. As subject to folly as humans anywhere, they focused on the fulfillment of their desires and on storing up financial wealth rather than on the true source of meaning in their lives—the land that gave them a livelihood and the water that gave them life. “Some time, in some age,” Buck wrote, “bodies of men and women had been buried there, houses had stood there, had fallen, and gone back into the earth. So would also their house, some time, return into the earth, their bodies also. Each had his turn at this earth.” I will be talking in this series about how the earth shaped my family, how we shaped it, and about the moral struggles that all plainspeople face during their turn at this earth.