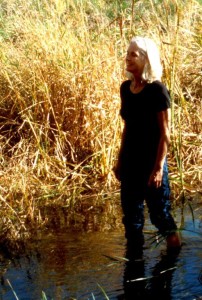 I once read a beautiful definition of a spring:  “a place where, without the agency of man, water flows from rock or soil.” That water can just appear in this way, often in a very dry place, has enchanted me ever since I was a young woman, traveling and camping in the Mojave Desert. In those miraculous places where water trickled through cracks in granite or up from an otherwise dry creek bed, life sprang forth as magically as the water. Fish weaved through clear pools, casting shadows on sand or gravel bottoms. Birds darted among willow shrubs and cottonwoods. Bees buzzed. Butterflies flitted from flower to flower. Invariably, I found places in the lush grasses where deer or antelope had slept.

Many years later, memories of those lush desert springs inspired me to search for places where water still flowed from rock or soil on the High Plains. I had read that groundwater pumping from the Ogallala Aquifer was causing the water table to drop below the level of the streambeds and drying out the historic springs where Indians had camped and pioneers had first settled. This concerned me personally because I was destined to inherit part of our family farm. Like thousands of other farms on the High Plains, ours withdrew hundreds of millions of gallons from the aquifer each year.

Exploring the mostly farmed countryside was not as exciting as exploring wild desert mountains. But spotting a pond reflecting blue sky in the distance, pulling onto the side of a gravel road, and hiking over pasture hills to sit beside live water, as the pioneers had called the water in springs, delighted me even more than discovering springs in the Mojave had. More, because the discovery meant that at least my family and other irrigation farmers had not, as yet, robbed the surface of every last drop.

But the surface is definitely being de-watered on the High Plains, and the situation worsens with each passing year. The loss of springs dries up spring-fed creeks and plains rivers, all of which, with the exception of the Platte, the Arkansas, and the main fork of the Canadian, are fed by the Ogallala. The North Fork of the Canadian, in the Texas Panhandle, the Smoky Hill in western Kansas, and the Republican, which flows from Colorado into Nebraska and Kansas, are vanishing. According to a Colorado State University study, the area where those three states come together lost 350 miles of streams between 1950 and 2010.

The life that thrives in and beside live water dies when the water does. Trees lose their leaves and their trunks and branches turn gray. Grasses shrivel. Birds disappear. There is no more shade, no more fish, no more habitat for wildlife in general. News stories about the dwindling Ogallala Aquifer emphasize the economic suffering to come. There is no doubt those consequences will be dire. But to me, losing, due to the agency of man, those places where once, without the agency of man, water flowed from rock or soil is the most tragic loss of all.