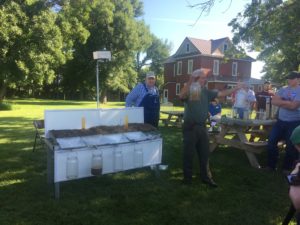 Could regenerative agriculture save the Ogallala Aquifer? That’s the question I first asked myself some months ago when I began learning about the Soil Health movement. I’d seen a video of Ray Archuleta, the agronomist who spearheaded the movement, demonstrating how non-tilled versus conventionally farmed soils absorb water. When he placed a clump of soil from a field that had been tilled year after year into a jar of water, it immediately fell apart and turned the water brown, while a clump from a field farmed without tillage held together for over 24 hours. In another test, simulated rain just sat on top of the soil from the tilled field, while it thoroughly saturated the non-tilled soil. Ray attributed these differences to there being more pore spaces in the non-tilled sample.

Excited by the implications for water conservation, I paid a visit to the well-known North Dakota soil health advocate Gabe Brown, who showed me how that porosity occurs. In a field where he’d harvested corn the previous fall, then planted a cover crop of rye and hairy vetch, he pulled a vetch plant from the ground and pointed to chunks of soil that clung to its roots. Plant roots, he explained, secrete what he called exudates, which serve as food for microbes and other soil life, including fungi. The fungi return the favor by exuding glomalin, a sort of biological glue that allows soil to stick together. The resulting chunks of soil, known as aggregates, create the pore spaces that allow water to infiltrate and be retained.

Fungi and other soil organisms also bring nutrients and water to plants from further away than their roots can reach. But tillage, herbicides, and chemical fertilizers harm those organisms and remove organic matter, also critical to water retention. By farming with diverse cash and cover crops, never tilling or applying chemical fertilizers, and seldom applying herbicides, Gabe had increased the organic matter in his soil from less than two percent to greater than six percent. Consequently, he said it could now hold three times as much water as it used to do.

This feature of healthy soil is especially important when it doesn’t rain enough. Although he’d received only 5.8 inches of rainfall the previous year, “I still grew things,” he said. “We had sedan grass cover crops eight feet tall.” When the local FSA agent encouraged him to apply for disaster payments, he said, “Why? I don’t have a disaster.”

“Just think of the resiliency for a farmer or rancher if they build soil like this,” Gabe continued. I nodded slowly, hoping to absorb all he was sharing at least half as well as his soil absorbed rain. This visit had been a rare opportunity and I was driven to pass the information on. Imagine what the wide adoption of these regenerative techniques could mean for the Ogallala Aquifer. They were the most effective water conservation tools ever conceived.