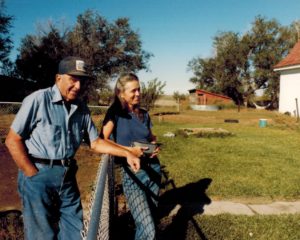 When I farmed with my father in the mid-1980s, I often expressed my concern that the water we were withdrawing from the Ogallala Aquifer, to irrigate our crops, would one day run out. My father, who was one of those hardy old-timers—a grandson of pioneers—said, “Don’t worry. Big Daddy will put the plug in before it’s too late.” By “Big Daddy,” he meant the government.

“Until then, I got mine!” He said this to get a rise out of me, and it always worked. In truth, though, he didn’t want to see the water disappear any more than I did. But like any businessman, he didn’t see it as his job to regulate himself. He intended to continue profiting from business as usual, until the government stepped in to save the aquifer. He had every reason to trust that this was inevitable, since, over his lifetime, he’d seen many environmental protections put in place.

As a young man, he’d seen FDR swoop in to save the Plains from another Dust Bowl. In order to qualify for federal Farm Program payments, he had to terrace his hillier land to prevent erosion. Under President Nixon, he’d seen the Environmental Protection Agency established and legislation passed protecting the nation’s air and water. Recently, in another effort to conserve topsoil, the government had begun requiring that he leave more organic matter on the surface between harvests.

But my father was wrong. Big Daddy never did step in. Today, farmers still receive Farm Program assistance to grow water-intensive crops such as corn and soybeans regardless of whether they farm in wet or dry climates. In 2005, the federal government also created the Renewable Fuel Standard, which requires that more and more ethanol be added to gasoline each year, thereby incentivizing farmers to grow more and more corn, the main feedstock for ethanol. These measures, combined with some severe drought years, have caused aquifer levels to drop twice as fast over the last six years than they did in the previous sixty.

I knew my father pretty well. He certainly would have enjoyed the boom in corn prices that resulted from the ethanol mandate. But he also would have readily admitted that yes, it is too bad—downright sad, really—to see farmers’ wells running dry and all of the streams, ponds, and reservoirs where he used to fish, and even swim as a child, drying up. He wasn’t one to “make a fuss.” He didn’t like to “stick his nose in” or his “neck out.” While he never wrote or called a politician to lobby for more subsidies, he certainly wouldn’t have written or called to ask for fewer of them or for changes in policy to preserve the aquifer.

Many argue that preserving the aquifer should be left up to those who draw their livelihoods from it. But business people cannot be expected to curtail their own immediate profits. Saving the aquifer will depend on others who have a stake in a livable future on the High Plains to stick their noses in, their necks out, and speak up.