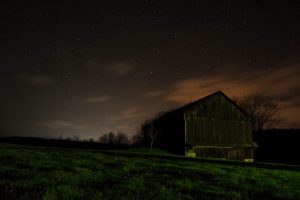 In my mid-thirties, while living back on my family’s Kansas farm after spending many years away, I couldn’t stand the automatic dusk-to-dawn yard light that blinked on each evening. In my childhood, we turned our yard light off some evenings just so we could gaze at the stars, and we always turned it off before we went to bed. Imagining what might lurk in the darkness had given the night its edge. Now the wash of dreary, fluorescent light robbed the night of mystery and the sky of its wonder and power.

How should I spend such a night? Inside, basking in the equally dismal light of a tv? While I enjoyed some television, I didn’t want a constant diet of it. I wanted to go outside and be dusted in the milky light of the moon and stars, not that yard light’s sickly fluorescent glow. But the light didn’t even have an off switch. How could my aunt and uncle, who lived across the farmyard from me and who had lived in the country most of their lives, not miss the darkness and stars as much as I did? How could the people living on surrounding farms, where lights also blinked on at dusk, not miss prairie darkness?

After months of torment, I finally got my opportunity to restore night to our farm when my father bought a new seed drill. Folded up for transport, it couldn’t pass beneath a wire that crossed the farmyard between the shop and sheep barn. “Would you have time for another small job?” I asked the electrician who came out to raise the wire.

When I told him what I wanted, he looked at me as if I might be a little off in the head, but graciously installed the switch anyway.

That night, for probably the first time in 15 years, darkness fell over the farmyard. And like balm to my soul, darkness, made doubly sweet by silence, fell over me. It was summer, and for the past month, irrigation engines had been thrumming around the clock and from every direction. But it had rained recently, so my father and the surrounding farmers had turned off their pumps.

Now, with the absence of all that manmade noise and light, the night came back to life. Ambient light from a cloud-obscured moon glazed the road between the house and mailbox somewhat, but I couldn’t gauge the distance between my eyes and the ground. This made each step I took an act of faith. Imagining the blackness around me as unfarmed prairie filled me with the sense of limitless possibility I’d last felt as a child when much more of the original grasslands remained. I even felt a little of the fear I’d last experienced in childhood, which was fine by me. With the fear came a heightened sense of being alive.

“The strangest thing,” said my aunt as I sauntered across the farmyard the next morning, my spirits high. “Did you notice that the yard light went out last night?”

I told her that I’d turned it off and that I hoped to keep it off from now on. I asked her, “Won’t it be nice to step outside at night whenever you want to and see the stars?”

She stared at me as if I’d lapsed into a foreign language. “Well don’t leave it off again,” she finally said. “That light’s for see-cure-i-ty.” She drew the word out the way she used to do when my cousins and I were children and she wanted to explain something to us.

It would take more words than I had available to me that morning to explain to her why that light, like the constant noise of irrigation engines, had the opposite effect of instilling security in me. Both absences, of silence and of darkness, were a deep disturbance of the natural world I’d grown up taking for granted. I needed the place I was from to be the same place, so that I could be the person the place had made.