When insanity is driven by greed it suddenly turns to “reason.” That’s what’s been happening as Kansas corn farmers’ latest brainstorm, to build an aqueduct transporting Missouri River water 360 miles across Kansas, has been gaining momentum. 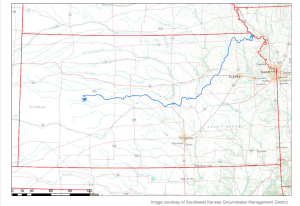 According to a just-released U.S. Army Corps of Engineers draft report, the aqueduct would take 20 years to build and cost $18 billion. And then there would be “significantly higher” habitat restoration costs, according to John Grothause, chief of the water planning section for the corps’ Kansas City district. (How one restores marshlands along a flood plain is anyone’s guess.) Kansas Senate Natural Resources Committee Chairman Larry Powell estimated that the cost to irrigate a hundred acres of corn with aqueduct water would be $90,000. He dared to suggest it might not make a lot of sense to keep feeding corn to cows at that cost. (In my opinion it never made sense: grass-fed beef is healthier for humans. It makes even less sense to turn it into ethanol, which does virtually nothing for the environment.) But who is likely to bear the brunt of the cost? Not farmers, as Powell suggested, but taxpayers is my guess.