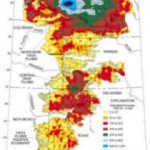 Kansas State University released an important study on the Ogallala Aquifer at the end of August 2013. It was picked up by newspapers ranging from The Washington Post to The Christian Science Monitor. In fifty years, according to study projections, 69 percent of the water in storage in the Kansas portion of the aquifer will be used up. Conservation could make a huge difference in that figure the study’s authors argued.