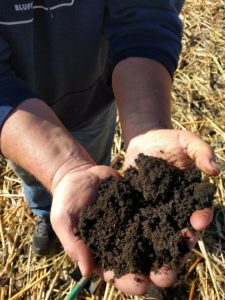 Gabe Brown threw a drain spade into the bed of his pickup, and invited me to hop in the passenger seat. I’d arrived at his North Dakota farm earlier that morning and was getting a crash course in the art and science of regenerative agriculture from one of its foremost practitioners.

The first field we drove to was not one of his, but that of a large organic farmer. “A very good operator,” Gabe said, “very diverse crop rotation, but heavy tillage.” He placed his foot on the spade and gave it a good push. It sank two-thirds its length – about as deep, Gabe explained, as the most recent tillage. He lifted up a clump of soil. “See how dry that is? See how tiny the particles are?” As he rubbed the soil between his fingers it turned to powder and blew away. “When rain hits that, what do you think will happen?”

“It won’t soak in? It will just run off?” Right-o. The most destructive thing you can do to soil, Gabe had explained that morning, is till it. I’d had a hard time wrapping my head around this premise, since I’d grown up watching my father get the cultivator out every time he spotted a weed. Gabe had patiently explained that tilling kills beneficial organisms such as earthworms and fungi, and it destroys what he called “armor,” the mulch of dried plant life that cools the soil, protects it from erosion, and feeds those organisms.

But stopping tillage is not enough. To build healthy soil, Gabe had also explained, you need to plant cover drops. In the next field he showed me, an industrial, no-till farmer had harvested corn in the fall and left the stubble, which was good. But “look,” Gabe said, “nothing green and growing, not even weeds.” This left organisms that depend on the substances exuded by living roots nothing to eat. Although Gabe’s shovel went in all the way, the soil he lifted had a hard, platey structure. It had a pungent odor too. Gabe said this came from a preponderance of bacteria. Industrial no-till, he explained, depends on synthetic chemicals, which upset the balance between fungi and bacteria.

In the next field, his own, Gabe toed aside a thick carpet of dried plant life. “Look at that armor,” he said. Earthworm castings covered the ground beneath the “armor.” He’d also grown corn last year, but he had inter-seeded it with sweet clover as a nitrogen source and had not used any chemicals at all. He’d then planted a cover crop of rye and hairy vetch, which was just coming out of dormancy.

The soil in this field was darker than in the others. It clumped when he squeezed it, and when he rubbed it between his fingers, it didn’t turn to dust and blow away, but crumbled and dropped straight to the ground.  “See?” Gabe said. “Like black cottage cheese. That’s what you want to see.” I’ll share more of what I learned from Gabe and his soil next week.