“Our Turn at this Earth” is broadcast Thursdays at 6:44 pm on HPPR 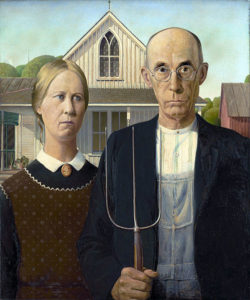 In the dream, a little girl stands beside a row of women. The women are dressed demurely in dark dresses such as the ones my mother’s mother wore—navy blue with tiny polka dots or dark green bordering on black. They sit erect in straight-backed chairs, their hands folded in their laps. The girl moves from one woman to the next, asking, “Do you have any magic?” Each in turn smiles indulgently at the girl. “Oh my! Why no, dear.”

The little girl, of course, was me. And those women, in their dourness and denial? They were the distilled, reticent essence of the women I grew up around. My mother and her friends didn’t wear dark dresses. They wore bright ones, and laughed often. I picture them at ladies’ club meetings, holding fancy saucers with cup rings on them to keep their delicate cups from splashing coffee onto the hostess’s homemade cookies. But there were certain things they never talked about, certain things that they would go to their death beds never having shared.

They were stoic. That word, often applied to pioneers and their descendants, brings “American Gothic,” the famous Grant Wood painting, to mind. An elderly farmer stands as erect as the pitchfork he holds at his side, his wife beside him. Studying an image of that painting just now, I note that the farmer sternly faces forward, looking the viewer in the eye. But his wife, although her expression is also severe, looks slightly off to the side. She is not connected to the viewer, and I would venture, she is not that in touch with herself. She seems, in fact, to be somewhere else entirely.

My mother was not severe, but she was emotionally inaccessible. I knew not to ask her personal questions. She had grown up in a family who didn’t share their feelings. Therefore I was growing up in such a family.

I never realized this was unusual until my mid-thirties when I went back to college and joined a women’s writing group. No fancy cups and saucers there. We met at a Mexican restaurant. Over enchiladas and margaritas, we critiqued one another’s short stories, and discussed… what else but the intimate details of our private lives? That’s how women are. We can meet at a party and be sharing our personal stories within minutes. It is how we connect, how we grow, and how we learn.

What caused the farm women of my childhood to withhold so much of themselves? Lacking sounding boards for their emotions on remote homesteads, had they forgotten they had emotions?

I don’t know. All I do know, thanks to those women I met when I returned to college, is what I had been missing until then. The magic in that dream, the magic that each woman in turn claimed not to have? It was not the power to feel. We all feel. It was the power to know their feelings.