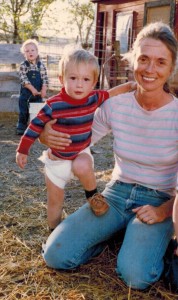 Mom & Son on the Farm

“As we approached the Kansas border, alll I could tune in on the radio was a moralizing talk-show hostess. ‘What did you think would happen when you married an alcoholic? Alcoholism is a disease, Emily, a disease. Do you remember your vows? In sickness and in—.’ I cut her power off midsentence.

***
Fortunately Jake was sixteen when we heard that radio broadcast, old enough to know that there were worse things than being the only child of an only mom. But the social scientists and the news media still have a ways to go in reaching that realization. I heard another report recently about how children in single parent (read “single mom”) homes are not as upwardly mobile as children with two parents.

That type of report used to drive me crazy when I was raising Jake alone.  So what about the fact that single parents, read “moms,” are likely  to live in poverty because Dad is not paying his half of child support? And how do they decide what a single parent home is anyway? If custody is shared, is the child living in two single parent homes? She or he must be twice as at risk for: 1) dropping out of school, 2) doing drugs, 3) going to jail, 4) staying in the presumably lower economic class he/she was born in. Right?

The message to moms is that we are bound to fail our children because we are inadequate as women. We don’t have that special ingredient that only a father can bring to a child’s life. More often than not the only truly special missing ingredient is cash.