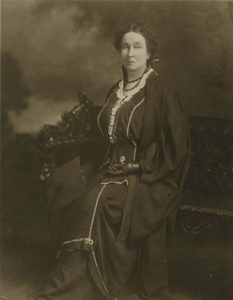 The word “populist” appears often in the news these days. Whether their politics are right, left, or center, people complain that the system is rigged against them and that they cannot adequately provide for themselves and their families.

It may surprise you, as it did me, to learn that the word “populist” was coined in the 1890s to describe a political movement begun by farmers. The movement was especially strong in Kansas, where it took hold among farmers plagued by years of drought and low commodity prices. Those original populists argued that government should be more concerned with their needs rather than those of big businesses such as railroads and banks. As one of the movement’s foremost leaders, Kansan Mary Elizabeth Lease, complained, government was “…no longer … of the people, by the people, and for the people, but … of Wall Street, by Wall Street, and for Wall Street.”

The movement soon evolved into the People’s Party and rapidly spread across the country to include workers in other industries. It ran several candidates for president, the best known among them William Jennings Bryan. While it never won a presidential bid, many People’s Party members won seats in national and state legislatures. The Party inspired the Progressive movement, which passed child labor laws and other curbs on big business, won the vote for women, and established a federal farm credit system and the graduated income tax system.

In the last four decades, the highest tax rate in that graduated system has been lowered, from 70% in the 1980s to an effective 40.8% after the latest tax cut. This has contributed to a concentration of wealth unlike any seen since the era of the original populists, when “captains of industry” such as John D. Rockefeller, Cornelius Vanderbilt, and J.P. Morgan monopolized oil, shipping, banking, and steel. Among today’s “captains” are Jeff Bezos of Amazon.com, Bill Gates of Microsoft, and investment king Warren Buffet. The shocking wealth of those three men alone now exceeds that of half of the nation’s population, or 160 million people.

But they are just the wealthiest among the wealthy few. On a Congressional Budget Office graph tracking wealth in this country over the last 20 years, the line representing the growth of the fortunes of the richest 10 percent looks like a jet taking off. While the rich ride that jet to new heights, those in the middle and lower income brackets are left standing on the ground.

Populism arises when working people can’t make ends meet while the rich keep getting richer. Lots of politicians like to lay claim to the populist label, but it actually goes against populist ideals to blame the hardships suffered by the many on a supposed invasion of poor immigrants or on others who work hard but still can’t pay their bills. That is one of the oldest tricks in the political playbook: Sew divisions among the less fortunate and maybe they’ll blame one another instead of noticing that the wealth of those who make the biggest political donations increases while everyone else struggles.

For decades now we’ve been told that more wealth at the top, amassed through tax breaks and deregulation, will trickle downhill, like water does. But anyone who lives over rapidly depleting groundwater, such as that held by the Ogallala Aquifer, knows that water can also be pumped upward, against gravity. All that’s required is a good pump engine. The engine, in this case, has been the work of the lower and middle classes, which expands business profits while wages remain stagnant.

This system is as unsustainable as irrigation on the High Plains. What will happen to all of that wealth when no one can afford to buy the goods and services that big businesses sell?