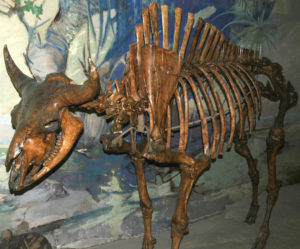 My cousin Mark Jones ranches in eastern Colorado on what were once the headwaters of the Arikaree, a tributary to the Republican River. Mark calls it the Ricaree. “Was there water here in the Ricaree when you were a kid?” I asked him.

“Is there ever water in it now?”

We sat in his windowless dining room, once a sod house. In the late 1800s a rambling two-story house had been built around it. I was enchanted by the ceiling, still thatched in reeds and cottonwood limbs that the original homesteaders had cut along the banks of the river. His grandmother had oiled the thatching, and it glowed red in the light cast by the table lamp.

Although I remembered attending family reunions on this ranch, I didn’t remember Mark.  I’d come to hear about the trove of ancient buffalo bones and projectile points that his father, Bob Jones, had discovered in 1972. The resulting Smithsonian dig had been the subject of a National Geographic article.

The irony didn’t escape me that the bison kill site from the Hell Gap culture of 10,0000 years ago had been exposed while Mark’s father was excavating for the installation of a center pivot irrigation sprinkler. It was groundwater irrigation that would ultimately dry out the river on which those Paleo-Indians had depended. Every tribe after them, including the river’s namesake, the Arikara, depended on it too. So had the bison—which proved to be Bison antiquus, a larger ancestor of Bison bison, the animals we commonly refer to as buffalo.

If we had satellite images going back to the 1940s, when high-volume irrigation came to the plains, they would show the headwaters of virtually every stream withering to mere ponds, then the ponds blinking out, west to east, one by one. That’s 10,000 years of reliable water depleted in less than a hundred. Because the High Plains slope downhill from the Rocky Mountains, the westernmost water disappears first.

“It was a fun, busy time,” Mark said, recalling the team of archaeologists who descended on the ranch after his father happened onto the Hell Gap site.

One determined grad student stayed on after the others left. “I’d see him driving up this side of the valley one evening, then up the other the next,” Mark said. The grad student’s efforts paid off one evening when he stuck his shovel in the ground and broke a seven inch spear point from the Upper Republican period. Beside the point, he found yellow war paint so fresh it could still be smeared.

Mark’s story, told in the reddish glow from the reeds overhead, gave me a bright glimpse into the thousand year old Upper Republican culture, which had been named after the river into which the Arikaree does still flow, but at less than half its original volume. The much older Hell Gap culture got its name from the southeastern Wyoming valley where its artifacts were first discovered, beside a small stream.

Indians had always, by necessity, camped and hunted near places where water flowed. But not even reeds could grow on Mark’s ranch anymore.