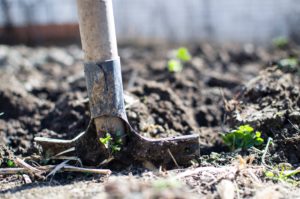 Every year about this time there comes a Saturday when I begrudgingly forego plans with friends and commit myself instead to working in the yard. This year, that Saturday came last weekend. Respect for my neighbors demanded that I address the unsightly weeds and grass that had grown up in the wood chips around my shrubs.

So there I was, bending my progressively less bendable frame onto my knees, pulling the invaders out one by one. But the weeds kept breaking off instead of coming up by their roots. I fingered an exposed corner of the weed cloth, recalling too well the trouble my compulsive nature had gotten me in before. But the cloth’s surface was covered in a one inch layer of decomposed woodchips. It really needed to be pulled up and re-laid. “Oh to heck with it,” I thought. “Here goes.” I raked away the woodchips and rolled the cloth, matt of composted soil and all, off of the bed.

It wasn’t until late that afternoon, when I was standing in the shower, vigorously scrubbing my hair in hopes of washing away the dirt under my fingernails, that I reflected back over the day and realized that when I’d lifted that matt and breathed the musty smell of moist spring soil, my mood had changed. The job hadn’t been such a big deal after all. In quick order and barely noticing an ache or pain, I had cleaned the weed cloth, replaced it and the wood chips, and moved on to other tasks that hadn’t been on my list. My mailbox pole now had a fresh coat of black paint. Even the wheelbarrow that had sat immovable in the middle of my backyard—its tire flat and its tub full of rainwater, mud, bricks and the stump of a holly bush my son had dug up for me weeks before—was now cleaned and put away.

Scientists have identified the earthy smell that arises from newly turned soil as coming from geosmin, an organic compound that we humans are so attuned to that we can detect just a few drops of it in a swimming pool. It is the same scent that once-parched earth gives off after a rain. If, like me, you find that scent intoxicating, it might be because when we breathe it in, we’re also breathing in Mycobacterium vaccae, a soil microbe that acts much like an anti-depressant, boosting levels of serotonin and reducing stress-related hormones.

Last weekend, on pulling up the weed cloth, I must have taken deep draughts of mood-altering Mycobacterium vaccae into my lungs. Like a lab mouse, who loses its fear of swimming after ingesting the bacteria, I lost my apprehension of the work that lay ahead and even approached it with zeal.

Working in my yard last Saturday might even have made me smarter. Mice dosed with Mycobacterium vaccae run mazes twice as fast as their mates. Maybe that’s why the problem of the wheelbarrow with a flattened tire had suddenly no longer seemed so insurmountable. “Hmm,” I thought. “What if I borrowed a neighbor’s bicycle pump?”