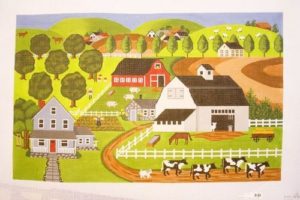 “We saw it go from raw prairie to a well-developed, settled condition.” That is how one settler’s descendant, writing in a family history volume, describes the transformation of Sherman County, Kansas.

Of course not everyone would agree with the cultural outlook embedded in that statement. The “raw” prairie had been sustaining human life for over ten-thousand years before our arrival. It didn’t need development, and certainly didn’t need to be farmed. But farm it we did, first as homesteaders, then with the Great Plow-Up in response to the rise in commodity prices during World War I, then with another plow-up when President Richard Nixon sold ten million tons of American wheat to the Soviet Union, and another after the 2007 Energy Independence and Security Act caused a spike in the price of corn, the main feedstock for ethanol. Today only half of the Great Plains grasslands remain, mostly in areas where soils or topography make farming unprofitable or too difficult. In satellite images, the remaining, arable half is now a quilt of brown, yellow, and bright green circles and squares.

My dismay over lost prairie lands was no doubt evident some years ago when I asked an old family friend if he regretted that most of the prairie had been plowed. “Hell no,” the seasoned old-timer said. “Baloney good ol’ days.” He looked at me across my mother’s well-appointed living room. “How about you?” he asked. “You’re sittin’ in a pretty nice chair. Would you rather be out on the prairie somewhere, in a teepee, weavin’ wool?”

If I were weaving wool it would have been in a southwestern hogan, not a plains teepee, but he was right. Profits from grain crops built the farmstead I grew up on, the schools and church I attended, the city buildings and stores, and paid for services ranging from road graders to electric power. Those profits also set me up in life and gave me more advantages than I can count.

And yet. I can’t get this image out of my head of these self-propelled chemical spray rigs I saw buzzing back and forth over the fields on my last visit home. Cabs on big wheels with long wings sticking out that must have been over a hundred feet wide, they looked like giant robotic insects. Witnessing operations like that, coupled with endless miles of farmed land, I felt as if I were on a planet in a science-fiction movie, one that was being mined for every last nutrient in its soils and, with the irrigation engines sounding over the hot earth on that day, mined or every last drop of water.

Well-developed and settled is fine. It’s what we want and what we need. But these days the land surrounding my home town looks like a factory. We went too far. Throughout the Plains, plows continue to bite into what little prairie remains. Since 2009, another eight percent of the surviving grass has given way to crops. It is time to reverse that trend and put some of the land back in grass`.