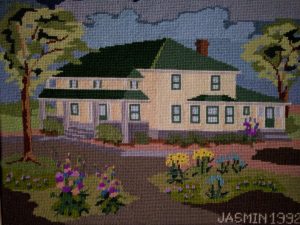 As a child, I lived in a big, old two-story farmhouse that my maternal grandfather had built in 1919, the year my mother was born.  It never occurred to me that my family could exist anywhere else. So it came as quite a shock when I was sixteen and my parents traded that house and farm for land in another part of the county and we moved to town. Over the next two decades, the house went through different occupants, then stood vacant for many years.

On visits back to Kansas, I used to drive out there to wander through the house’s cold and silent, high-ceilinged rooms. It felt like an empty husk. But if I thought that was strange, nothing was stranger than the inevitable day I approached along the county gravel road only to look toward the knoll where I’d grown up and discover that the house was gone. I thought I must be dreaming. How could it have simply vanished? Had I taken a wrong turn? How was that possible on a drive that had carved ruts in my memory as deep as the dry creek that ran through our north pasture? Except, wait, most of that pasture was gone too, plowed and replaced by a field of short green wheat. I drove up the two-track trail that used to be our graded road. Where the house once stood, a center pivot irrigation sprinkler circled over a field of ankle-high corn, like a wand wiping the slate of our family past clean.

I’ve paid many visits to that land since then, and whenever I do it’s uncanny how often the farmer who now owns the place spots me. He lives several miles away. Maybe he sits on top of his barn with a telescope, or maybe he hid a remote video camera in the thistles around the pit silo where he threw all of the junk from our farmstead that wouldn’t burn. All I know is there I’ll be, this woman “getting on in years,” as they say, tottering, as it were, over the furrows, trying to reconstruct in my imagination exactly where the house, two barns, chicken coop, pig sheds, granary, shop Quonset, and storage bins once stood, when along he’ll come in his big pickup. Depending on the season, we’ll stand outside or sit in his air-conditioned or well-heated cab and talk for a while.

He always tells me how he hated to tear the house down. Even though he didn’t himself grow up in this county, his wife did, and stories of my grandparents and parents still circulate among the few remaining neighbors. He doesn’t like to see history destroyed, much less be the agent of that destruction. But he couldn’t let that big flat hilltop sit idle either, not with it just crying out for a field of irrigated corn.

I tell him not to worry. I understand that farming is a business. My father would have done the same thing in his shoes.

The last few times I visited home, I haven’t felt nearly as compelled to drive out there as I used to feel. But next time I return to Kansas, I might go just to tell him why that is.

I don’t miss that house anymore. To live is to experience loss. But as people and things have dropped away from my external world, my awareness of their presence inside me has grown. My primal relationships, with my parents and other family members, formed in that farmhouse. Those people, whether living or dead, are still as much a part of me as ever. They live inside me, as does that house, with its spacious, sunlit rooms, its creaking floorboards and remembered smells. And somehow I still live inside it.

In my mind’s eye, those walls now seem as solid as ever, because my awareness of who I am has grown more solid. Among all of the losses, this is a gift that age brings.