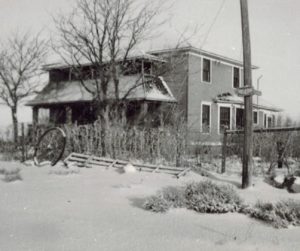 They Came to Stay—that is the title of three big history volumes recording the stories of the first settlers of Sherman County, Kansas. I grew up basking in the pride of that phrase. Proof of my own family’s long past in Sherman County could be seen in the crumbled remains of the sod house where my mother’s older siblings had been born. In 1919 my grandfather built the big, broad, two-story farmhouse we lived in. Clearly, he believed that his family would stay on that land for generations to come. Why else go to all that effort?

Yet when I was sixteen my parents announced they’d traded our farm for land elsewhere in the county and that they would be building a new house in town. I couldn’t have been more thrilled. Forget the horse who had been my first love since grade school. Forget our dozen yard cats and all three dogs, and the chickens, ducks, rabbits, pigs and cows. Forget my father’s thousand ewes. No longer would I stand watch with him on the farmhouse balcony, hoping that clouds gathering in the west would roll toward us and bring rain. No longer would grand wheat fields and pale green buffalo grass pastures stretch before me each time I looked out my bedroom window or stepped out the door. I didn’t care. I’d always envied my town friends who got to hang out with one another after school. Now I would be a town girl too.

Only years later would I begin to understand how disorienting that move to town had been. Far back into my family’s European past, all my ancestors had ever done was farm. If anyone asked, we would have said we still farmed, but really only Dad did. Each morning, he would gather his iced tea jug and lunch pail and head out to the new farm while the rest of us went about our town lives.

None of us ever remarked on what a sudden and severe change we’d undergone or seemed worried that, in leaving the farm behind, we’d also left ourselves. Today I look upon that move to town as the first step in a progression that made it possible, four decades later, after my father had died, for us to entertain, then act on,­­­­ a thought that had once been unthinkable.

A few years after the sale, a neighbor farmer, having watched so many families like ours disappear, shook his head in bewilderment. “It was all nothing but a slow migration,” he said.

We had that conversation at my mother’s funeral in the church she’d attended her entire life.

Economic or social forces generally drive migrations. The food supply diminishes or a neighboring tribe or nation invades. What forces were at work that caused many High Plains families like mine to abandon our way of life? What do you think? Please write to me in care of this station or at my Web site and share your ideas.