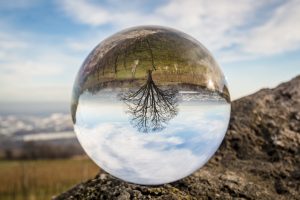 Last year, I bought a 2012 Subaru Forester with only 30,000 miles on it. A great deal – not exactly what I wanted, but I’d been researching cars for months. I’d given up on the notion that a car existed that could tow a hefty wagon, take me far off-road, and get good gas mileage. So I finally caved on the mileage point.

That choice has been bugging me ever since. Twenty miles to the gallon doesn’t get you very far, and with every fill-up, I am reminded that in choosing this car I cast a selfish vote. Guilt is an uncomfortable emotion, and experiencing so much of it over my shiny black, gas-guzzling Forester makes me almost wish I was one of those people who doesn’t believe in climate change. Normally these people are called climate-change deniers, but a recent Psychology Today article convinced me that description is inaccurate.

“Denial” implies inner conflict. It’s a struggle of conscience to deny the truth. But those who believe there is no such thing as climate change, or who believe it is not human caused, are not necessarily experiencing any conflict. Many have simply chosen to believe what they want to believe. We humans have a tendency to do this because emotions and reason are not separate brain functions. They are interwoven. It is harder to confront the grim future that evidence on climate change predicts than it is to believe that the world will keep on keeping on as it always has and that we have nothing to fear.

I wish I could feel that confident about the future, but the scientific articles I’ve read popped my complacency bubble. If the world’s climate scientists say climate change is real and that burning fossil fuels causes it, then I know that it is, and we do. I don’t want my grandchildren to grow up in a world where thousands of species have gone extinct, where glaciers have melted and millions have no water to drink, and where droughts and famine prevail.

But I still want what I want. So I bought the Subaru. As a consequence, I’m the one experiencing the inner conflict, not the so-called deniers, who are actually believers in an alternative realty. They drive whatever they want to drive, their consciences clear.

I need this car because, as a homeowner and gardener, I often have to haul things. My son borrows it to haul things as well. I need it because I simply must get out into the wilderness in order to breathe, and when I go, its all-wheel drive feature takes me far off the beaten path, where I prefer to camp. But my boyfriend owns a Subaru Outback. Maybe I could use his car for those things. Maybe I could trade my Forester in on a Prius, which he could borrow for out-of-town highway trips. Without causing ourselves much discomfort at all, we could play slightly less of a role in hastening the end of the world as we know it.

Will I trade my Subaru in on a Prius? Maybe. But that choice, between a car that guzzles gas and one that only sips it, is hard even for me. That is why I’m given to saying lately, “I’ve discovered the problem, and the problem is me.” I am why we need tougher fuel standards, like those the Obama administration put in place, but which the Trump administration is rolling back.

Even if those tougher standards limited my choice in cars, I would sleep better at night, but probably never as well as those who believe there is no problem. “Calm down, Chicken Little,” the good sleepers tell me. To which I say, “Wake up! No, the sky is not falling, but seas and temperatures are rising.” If given the opportunity, I would also add that the droughts, famine, severe weather, and wildfires we’re already seeing are destined to get worse if we don’t take action now. The ability to believe whatever we wish to believe can get us into real trouble.