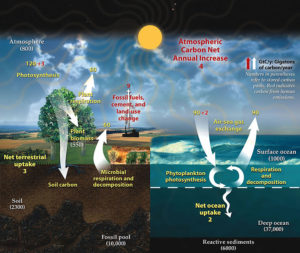 Stories about disruptions in the carbon cycle abound in the news these days. But recently, it occurred to me that I didn’t really know what the carbon cycle was. A few Google searches later, and I will never again see my fall garden in quite the same way. It has always seemed a miracle to me that a tiny seed can sprout into a squash vine that takes over my backyard. Well, now I know that during photosynthesis, plants use the sun’s energy to rearrange the carbon from carbon dioxide, and the hydrogen and oxygen in water, into glucose, which they use to grow. Carbon, I read over and over, is the “building block of life.” All plant and animal tissue is carbon based.

While growing, plants also put carbon into the soil, where multitudes of tiny other life forms use it to build their tissue. If I leave dead plant matter on the surface of my garden, bacteria will decompose it. Those bacteria will release some carbon, in the form of carbon dioxide, back into the air, but they will also carry some of it downward into the soil. When I eat the vegetables I grow, my body, in turn, uses their carbon-based tissues to build its own tissues and also exhales CO2, doing its part in the carbon cycle.

Over millions of years, decayed marine plant and animal life formed carbon-rich natural gas and oil and coal. When we burn these fossil fuels, we suddenly release carbon that has been sequestered for millions of years belowground. Since 1750, when the Industrial Revolution began, the amount of CO2 in the earth’s atmosphere has increased by over 30 percent. It has been at least 800,000 years since that much CO2 has been present in the air above our planet. Less of the sun’s heat can escape the atmosphere than in the past, because it is trapped by those increasing levels of CO2. That is why, over the 136 years that records have been kept, average world temperatures have been climbing. Seventeen of the last 18 years were the hottest.

That is bad news for farmers, because excessive heat interferes with crop growth. But with every challenge comes new opportunities. Enter carbon farming, one of the most promising ways to combat climate change. By growing cover crops and refraining from tillage, farmers can cool their soil, expand its water-holding capacity, and improve its fertility while also sequestering carbon in the ground. Some governments around the world already pay for that service by issuing carbon credits to farmers, who can then sell them to industries that release more than their share of carbon into the atmosphere. It would be good for farmers, not to mention the rest of humanity, if our government would do that too.