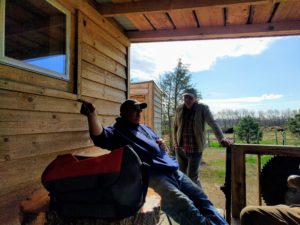 “This farming has gotten so industrialized and out of hand,” Gabe Brown said. We were sitting in the shade on his North Dakota regenerative farm, watching several hundred chickens scratching in a field of mixed cover crops. They provided ready contrast to the ills Gabe was describing. Most chickens these days live in cages so small they can’t even spread their wings.

Abe Collins, a soil advocate colleague of Gabe’s, felt he understood the root of the problem. “Farmers,” he said, “are just paid for food. That’s how you set up extinction. Just pay for one thing and to hell with soil and biodiversity.” If producers were restoring soil health and water quality, he argued, they were performing a public service and should be paid for that.

Except farmers created the unhealthy soil and dirty water in the first place, I couldn’t help pointing out.

Abe responded quickly. “A social-economic structure that’s ten thousand years old did that. It was not…to say that the individual farmer…”

John Norman, the soil scientist Abe had enticed out of retirement to study the soils on Gabe’s farm, pointed out that if a factory chose to eliminate maintenance, it would be out of business in no time. Yet farmers in our economic system have to use up the soil and water necessary to future production because they are under so much pressure to maximize yield.

Abe informed us that the shekel of Mesopotamia was just “a silver equivalent to a bushel of barley.” But other things also needed to be weighed and paid for now, like flood control and carbon sequestration and groundwater recharge and purification.

We all had a personal stake in this conversation. John had spent his career watching soil eroding, its structure collapsing, and its nutrients being depleted. When Gabe first began farming, he underwent four years of drought and hail. Seeing all of the life that returned to the soil during that period of little tillage and few pesticides caused him to rethink the way he farmed. I had watched the Ogallala Aquifer, the water of my homeland, dwindle and become contaminated by nitrates and herbicides. But it was Abe whose emotions were most engaged at the moment.

He said, “I’ve been a dairy farmer who couldn’t buy a five-year-old kid a $20 bike, working eighty hours a week. I never forget that moment. It chokes me up now thinking about it. And this year I think USDA says that eighty percent of ranch and farming income in the US is off-farm income. Should the farmers just do this because it’s the right thing? No! No. The majority are not the mega-farmers that you wag your finger at for making too much money. Farmers are going extinct, and they’re the people who can regenerate the world that we need.”

I had to agree. No more eloquent words had ever been spoken on behalf of farmers, or the world.