Every few years, I obey the compulsion, as instinctive as a migratory bird’s, to return to the home nest. Last time I visited the northwest Kansas farm I 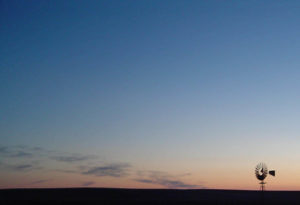 grew up on, I parked my car by the pole that used to bring electricity to our house. The electricity it brought now kept a pivot sprinkler clocking through the ghost of the farmstead my mother’s family had settled in 1906. As usual, I walked down the rows of ankle-high corn, searching for artifacts I might recognize. Once I found a piece of the bowl my mother used to mix cakes in and a piece of blue glass from a vase in which she placed flowers from her garden.

But on this visit I discovered an even more telling artifact. In a clump of tall weeds near the pit silo where we used to burn our trash and throw our junk, I happened on the head of our old windmill. Almost every Plains home has at least one sculpture of a windmill woven from wheat or a painting of a windmill silhouetted by a spectacular sunset—to the point that these Plains icons have become Plains clichés. Yet it’s only fitting that we memorialize them.

Walter Prescott Webb, author of the first comprehensive history of the Great Plains, wrote that windmills were “…to the drought-stricken people like floating spars to the survivors of a wrecked ship.” He pointed out that, in order to survive, early settlers—most of whom came from moister climates in Europe or states to the east—had to adapt to the dry and treeless place. Lacking wood, they learned to build with sod. Tormented by the wind at first, they soon came to recognize it as a resource offering them the means to pump groundwater.

The windmill whose remains I now stood beside had creaked and clanged all throughout my childhood. Over the course of an afternoon, its shadow would progress across the farmyard and up the front of our big barn. How strange it felt to tower over what had once towered over me. Not only strange, but unsettling: Today, there were no creaks and clangs, only the pulsating, distant roar of the big truck engine that pumped water for the pivot sprinkler. The windmill had pumped at the rate of about five gallons a minute. The irrigation engine was probably drawing about 800 gallons in that same wink of time.

I never knew my maternal grandfather, but his frugal values and acceptance of plains realities were passed down to me nonetheless. My mother often told me that whenever she filled the tin cup that hung from the windmill, he made her drink it all. “Water is precious,” she recalled him saying. “You don’t just pour it on the ground.” If he had lived long enough to witness water gushing from the earth onto his fields, what would he have thought? Would he have imagined endless bounty or eventual ruin? Would he have foreseen green crops all the way to the horizon, or would he have seen red?