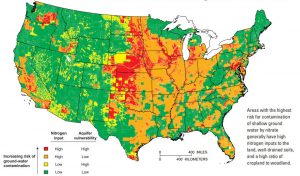 Areas at high risk of nitrogen contamination of groundwater – USGS

Almost invariably, at meetings on the future of the Ogallala aquifer, the only issue discussed is the dwindling quantity, not the quality, of the water. And the only attendees are usually farmers and owners of ag supply companies. That’s why, at one such Goodland, Kansas, meeting, I was impressed by the participation of a man whose family had run one of the town’s home service businesses for as long as I could remember. He was there as a “concerned citizen,” he said. His concern was that nitrates, in the ammonia fertilizer farmers apply to their crops, was leaching into municipal and private drinking water.

No need to worry, one farmer assured him. The soils in the area were good at “denitrification,” a natural process that transforms the nitrate in fertilizer back into simple nitrogen and renders it harmless.

“I don’t see how that could be,” said the townsman, humble in the face of the farmer’s authority, but also clearly confused. “Why did we have to build that new six-million-dollar water treatment plant?”

Must have been some other contaminant, another farmer told him, perhaps from the feedlot north of town.

I was curious about the treatment plant, so decided to look into it. In 2009, Goodland, like hundreds of other Midwestern and Plains communities, discovered that five of its 11 wells had nitrate levels that exceeded federal health guidelines. The cost of the plant, to be exact, was 5.7 million dollars, money that the town is paying back by doubling users’ water rates.

Nationally, public water systems spend $5 billion dollars each year to remove nitrates that have leached io drinking water. But many towns are too poor or too small to service the debt. Last year, 118 public water systems throughout the U.S. were out of compliance with the federal standard.

Feedlots do contribute to the problem, but the vast majority of the nitrates are coming from fertilizers applied to farm fields. Irrigation carries those chemicals down to the water table faster than in non-irrigated fields.

According to one Kansas Geological Survey study, nitrate levels under irrigated fields range from 20 to 24 ppm, over double the national limit of 10 ppm. That safety standard was set for good reason, because nitrates above that level can cause infants to develop a serious condition called “blue baby syndrome.” But 10 ppm is actually far too high. According to the National Cancer Institute, water with just half that amount increases the risk of colon, kidney, ovarian, and bladder cancer.

Private wells in farm country are just as likely to be contaminated as city wells, so if you have a well, it’s important to get your water tested regularly. Call your city or state health department for information on laboratories that test well water. If it turns out your well has high nitrate levels, there are ways you can filter or treat it.

Another step all plains citizens can take is to encourage their farm neighbors to tackle this problem head on. Fertilizers can be prevented from leaching into groundwater by planting cover crops, refraining from applying nitrogen in the winter on frozen ground, planting legumes which do not need nitrogen fertilizers, and testing soils regularly so that fertilizer can be applied only where it is needed. Farmers save on fertilizer costs when they take these precautions.

“We’re the whipping boys,” said one of the farmers at that meeting I attended. The feeling was understandable. It is only human to get defensive in response to criticism. But denying a problem as serious as nitrate pollution is not a neighborly, nor a viable approach.