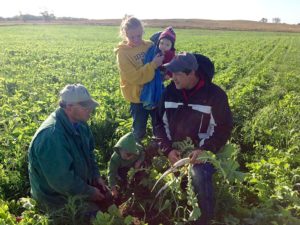 Often in our culture, when thinking about land, we think only about how much money we can make farming its soils, grazing its grasses, mining its minerals, or harvesting its trees. We think this way, understandably, because we need to make a living and secure our futures, but in that pursuit, we sometimes fail to notice what the land already gives us in its natural state.

I’ve spent the better part of my writing career trying to describe why standing on a mild green buffalo grass prairie, or hearing a meadowlark sing, or noticing the way light suffuses the plains landscape lifts my spirits. I go to this effort because in order for us to make choices that favor the health of our natural systems, we need to recognize our connection with them. If we feel connected to nature, then we feel any harm done to it in our own beings—right now, not decades in the future when we might realize we are now ill, or our grandchildren are being born with birth defects, or our food systems have collapsed.

I first became aware of my affinity with nature in my young adulthood, camping in western wildernesses. In particular, I fell under the spell of the breathtakingly clear blue waters of the Sierra Nevada mountains. They are why, when I went home to Kansas and farmed with my father, I couldn’t watch the finite waters of the Ogallala aquifer gush from our irrigation pipes without imagining my own blood pouring onto the ground. Whenever the odors of herbicides and chemical fertilizers drifted over the farmstead, I thought of all the life in the soil that surely couldn’t withstand such an onslaught and felt as if my own cells were under attack.

Of late, I’ve been excited to learn about the Soil Health movement, because in the faces and words of the many farmers participating in it, I see that nature has won them over much the way it won me over when I was a young woman exploring western mountains and deserts. As earthlings, we are part of the earth, but many of us don’t think about this much—not until, like me, they dive into a mountain lake, or live for a while in a wild and beautiful place, or, like those farmers, hold a clump of rich soil, teaming with worms and exuding those smells that we humans are uniquely wired to find intoxicating.

Those farmers beam with rightful pride at having restored their soil to health. They undertook that work not only to increase their profit margins and the longevity of their operations, but because examples they’d seen of truly healthy soil on others’ farms ignited their passion to restore their own soil. In that spreading passion lies the greatest hope I’ve seen to date for the future of earth’s natural systems, and for ourselves.