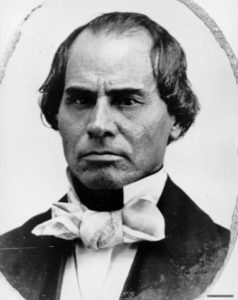 It “…was the worst blow ever struck at any tribe in the whole plains region, and this blow fell upon friendly Indians.” That is how one survivor, George Bent, begins his description of the massacre that took place on November 29, 1864 in southeastern Colorado. Bent was the son of Owl Woman, whose father was a prominent Cheyenne chief, and William Bent, a famous fur trader of the era. Thanks in part to the Sand Creek Massacre National Historic Site, which opened to the public in 2007, many more people know about that shameful day in settlement history than in my childhood. Although my hometown was less than a hundred miles from Sand Creek, it was never mentioned.

To briefly summarize: At dawn on November 29, 1864, U.S. Army Colonel John Chivington and 700 men of the Colorado Cavalry attacked a peaceful village of Cheyenne and Arapaho, murdering between160 to 200 people, approximately two-thirds of whom were women, children, and infants. The peace chief Black Kettle had chosen to camp at Sand Creek because Colorado’s Governor Evans had assured him that his people would be safe there.

Bent fled with others upstream and dug a pit in the sand to hide in. Soldiers fired howitzers into the pits, killing most who took refuge there, but Bent survived. Of the night that followed, he wrote, “There we were, on that bleak, frozen plain, without any shelter whatever and not a stick of wood to build a fire with.” He describes how the able-bodied tried to prevent the wounded from freezing to death by covering them with their own blankets and robes, or with handfuls of grass.

Riders who had escaped the attack and raced the forty miles to Big Timbers—a Cheyenne Dog Soldier camp on the Smoky Hill River, in Kansas—returned the next morning with mounts and blankets for the survivors. “As we rode into camp,” Bent wrote, “everyone was crying, even the warriors and the women and children screaming and wailing.  Nearly everyone present had lost some relations or friends, and many of them in their grief were gashing themselves with their knives until the blood flowed in streams.”

Chivington’s men did not stop at killing their victims, but went among them afterward, slicing away scalps and body parts as trophies. A Congressional investigation that followed found it  “…difficult to believe that beings in the form of men, and disgracing the uniform of United States soldiers and officers, could commit or countenance . . . such acts of cruelty and barbarity.”

Reading of these horrors, I was consoled somewhat to learn that two officers refused to participate in the massacre and ordered their men to stand down. One of them, Captain Silas Soule (Sole), was among the first to report the crimes. While an Army Judge censured Chivington for committing “cowardly and cold-blooded slaughter, sufficient to cover its perpetrators with indelible infamy,” Chivington was out of the military by then, and no charges were ever brought against him or his men.