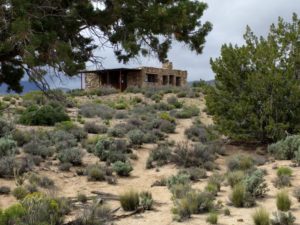 As a young woman, newly single after my marriage had ended, I bought a little one-bedroom Victorian in an unassuming, foggy San Francisco neighborhood. That house would be worth a fortune today. But I was young then. I didn’t think about my financial security in the distant future. I wanted to live my dream now. I sold the house a few years after I bought it for what I considered a tidy profit and moved to the Mojave Desert, to live alone in a rock cabin and teach myself to write. The money, I figured, would carry me for about two years, after which I could support myself selling stories to magazines.

At the time, it didn’t occur to me to draw parallels between the desert’s aridity and the steppes of the High Plains, where I’d been raised. I just knew that I craved the desert’s panoramic vistas and felt that, somehow, I would be my most authentic self there.

It takes a long time to learn to write well. As it turned out, all that my literary efforts yielded were enough rejection slips to paper the walls of my outhouse. But I still view that foolish seeming leap of faith I took in my late twenties as the best decision I ever made.

Like most arid places on this planet, the Mojave is a land of extremes. A January storm blew through during my first night at the cabin, and I awoke to a snow-covered fairyland 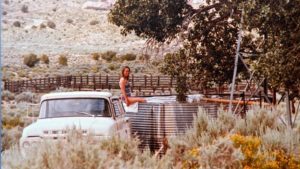 beneath an azure sky. Four months later, such fierce heat pulsed off the sand that I fully expected it to melt the rubber soles of my sandals. Late each afternoon I would thread my way down through juniper trees and gray granite boulders to a six-foot tall stock water storage tank, ferret out the little stepladder I kept in the grove of rabbit brush beside the windmill, take a few deep breaths to still my nerves, and…. Call it shock, or call it pleasure, I have never felt either so vividly as during those hot afternoon swims in icy water pumped from deep under the desert.

Like a rare and extended dream, those three Mojave years cast core, subconscious knowledge from my childhood into high relief. The same two archetypal poles—expansive vistas and cold, pure, luxuriant water lifted from underground by a windmill—defined life on the western plains. I hadn’t returned to my literal home, where more and more of the prairies gave way to the plow each year, but to the spiritual home those prairies had inspired in my imagination—even more arid lands that, unlike the prairies, were too rugged to farm.

Seeing myself in the Mojave’s mirror, relishing its beauty and the blessed relief of its rare waters, I realized that although I’d left home at eighteen to live in the city, home had never left me. I was no less an outgrowth of western Kansas than a blade of buffalo grass or clump of sun-worshipping yucca. What differentiated me was the ability to realize the profundity of this earth-body connection, and to honor it by speaking up for the preservation of the water under the land of my birth.