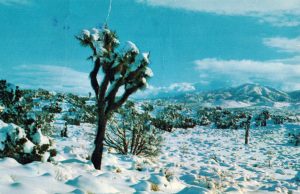 Snow in the Mojave Snapshot

If you could relive just one moment throughout eternity, which one would you choose? I asked myself that question a few weeks ago, as I watched After Life, a movie by the Japanese director Hirokazu Kore-eda. In this movie, people who have recently died are instructed to choose a moment from their lives that will then be recreated on film and replayed, again and again, forever. On each viewing, it would be as if they were experiencing the moment for the first time.

I would be among the lucky ones in Hirokazu’s’s version of the afterlife, because I have many good memories from which to choose. The most exhilarating ones come from my desert period, which began in my late twenties and lasted about five years. On a camping trip in Death Valley, I fell in love with the softly curved, cream-colored dunes that stretched across the basin toward the mysterious reaches of the snow-capped Panamint Mountains. It wasn’t just the visual grandeur that grabbed me, but the freshness of the air and pervasive silence that filled that immense space. I hadn’t felt such peace since my Kansas farm childhood when I had taken sunlit silence, clean air, and wide vistas of land and sky for granted.

But because the desert was too rugged and dry to be farmed, it could not be tamed, and its natural beauty and wildness captivated me. Soon, I began entertaining the idea of leaving the city and moving to the desert. I explored deserts all the way from Oregon to New Mexico, and finally found my new home in the Arizona-Nevada-California border country south of Death Valley: a little rock house overlooking five mountain ranges, without another manmade structure in sight.

Even though I have many cherished desert memories, it didn’t take me long to decide which moment I would choose if I had to relive it forever.

It was a bright January morning. I was in the driver’s seat of my boxy red Land Cruiser, a “Jeep” style vehicle that had so many years on it that its paint had oxidized. I couldn’t touch the hood without my fingers coming away stained red. My best friend, Beatrice, sat beside me in the passenger seat. She’d ridden down to the Mojave with me to help me set up housekeeping on the rock house hill. I wouldn’t be living in the house itself anytime soon. It had a collapsed ceiling and no windows. The next day, Beatrice and I would drive 65 miles into Needles, purchase a small house trailer, and tow it back up the hill. At the moment, we were on our way to visit the elderly ranching couple who owned the property and had consented to let me live there in exchange for fixing up the house.

Snow had fallen the night before. Yes, it does snow in the Mojave, but it’s a rare treat. We had spent the night in a tent beside a gnarly, windswept juniper tree whose branches were now white and drooping.

“Let’s go!” Beatrice said. “Brr! Roll your window up.” But I was fixated on the way my side mirror framed an image of the yellow-granite house, destined to become the most beloved home I would ever have. I couldn’t get over the way the finite image of the rock house reflected in the mirror was framed by the nearly infinite vision beyond us, of snow-dusted juniper, cholla cactus, and sage leading into the sky’s cobalt blue.

My memory of that moment has been so vivid over the last forty years that I was certain I’d taken a picture out the Land Cruiser’s window. I could have sworn I’d seen it often in my desert photos. But when I turned the pages of those albums, it wasn’t there. It seems I don’t need a picture to remember it. Nor would I need a movie to remember it by if I died tomorrow.

It was a bright new morning, a new day in the life of my soul, exactly what one hopes for in the afterlife.

This commentary was inspired by another essay called “Hereafter, Faraway,” by Viet Thanh Nguyen, who was also responding to Kore-eda’s film. It was one of the best pieces I’ve ever read in the The New Yorker, and that is saying a lot.