“Our Turn at this Earth” airs every Thursday at 6:44 pm CT on KANZ. 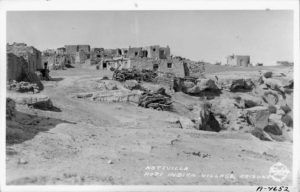 When I was a young woman, a friend who assisted the Hopi Indians with their causes invited me to join him on a visit to Hotevilla, the most traditional village on the Hopi Indian reservation. The Hopi descended from ancient Pueblo cultures that emerged in the desert Southwest around the 12th Century BC. They dwell in the region we now think of as northern Arizona. Their ability to stay in one place through the seasons, decades, and centuries rests on the domestication of corn on this continent seven thousand years ago.

As we approached across the desert floor, I at first mistook the low-lying, flat-roofed stone houses for rock formations atop the mesa on which they stood. But soon we were inside one of those “formations,” made warm by a fire in an iron stove, sharing supper by kerosene lantern light with a family whose members sometimes lapsed into a native tongue that predated English on this continent by thousands of years.

As someone who had always taken pride in having descended from pioneers, it humbled me to realize that my people were actually newcomers in the Western Hemisphere. But it also felt affirming to once again be in the quiet, grounded presence of a farm family. Sitting at table with them, eating a meal of chicken stew and blue-corn piki bread made entirely from homegrown ingredients, had an elemental, earth-bound wholesomeness about it that reminded me of my own farm childhood.

The next day, we went with our host, James, to the plot of land he farmed and watched as he planted corn, by hand, in mounds a few feet apart. While his subsistence farming differed dramatically from the production agriculture my Kansas family practiced, the visit nevertheless felt like a return—not to my direct personal past, but to an ancient way of life in which all modern farming is rooted.

I paid that visit to Hotevilla during my desert-traveling years, and much as the desert had immersed me in the qualities of aridity that had formed my spirit as a child—reliable sunlight, blue skies, distances, pale vegetation, clarity of light and air—so this visit with a desert family awakened me to my own farm family’s heritage in a deep and universal way of life that drew both sustenance and meaning from the soil.

As archetypal examples of farming people, the Hopi provided a mirror in which I began to examine my own family’s farming practices. A sense of longevity emanated from their way of life, their houses, and from them. I imagined how comforting it would be knowing that your people’s tenure in one beautiful place went back a thousand years and was viable enough to go on for a thousand more. The Hopi, for me, embodied the most essential lesson to be taken from living off the land as farmers do. You do not use a place up and move on. That would negate the whole cultural benefit of agriculture, which first made settlement, and civilization, possible.