Our Turn at this Earth” airs weekly on High Plains Public Radio. 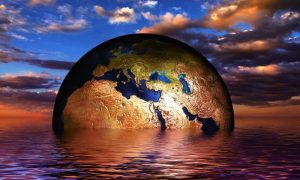 I grew up with a healthy respect for a form of intelligence my mother referred to as common sense. Ever since that Kansas childhood, I have equated the place, and the people in it, with that theory of knowledge, which holds that you can know in your bones a whole lot of  stuff without having to be taught. If it starts raining, then you know to take shelter. If you open a pasture gate, you close it behind you.

If you have limited income, then don’t charge your purchases on a credit card, or if you do, pay the entire balance each month. My parents seemed to have a built-in alarm system that shouted warnings at them whenever they were tempted to spend more than they earned. Living within their means was one of the cardinal rules they lived by.

“It’s just common sense,” Mom was in the habit of saying. But whether common or not, their practical intelligence was a very useful character asset that allowed my parents to avoid painful consequences and protect their own interests – and perhaps not all that common after all, especially when you consider how often we humans act against our own interest.

This is especially true when we act collectively. Take, for instance, the economic system that we collectively created. Predicated on the notion of perpetual growth, it must continually expand while every one of our increasing number strives for an ever-higher standard of living. If the Gross Domestic Product fails to grow at the two to three percent annual rate considered ideal, economists sound alarms. But the real cause for alarm is the growth, not the lack of it.

All of that expansion would be fine if the resources it depends on were also expanding, but that is impossible. We are living beyond our means on a finite planet. We are depleting and polluting our water and soils; using up our minerals; killing off other species, many of them essential to our own food supply; and destabilizing our own climate. If that’s not the opposite of common sense, I don’t know what is.

I think the fact that we are spending beyond our planetary means is obvious to many more people than is generally believed. But people feel overwhelmed by the magnitude of the problem. Instead of listening to their own internal alarms – “Danger! Danger! Life support systems failing!”—they try to ignore the warnings.

How can we slow down, reform, or turn around a world economy? What can any individual do? Better to just pretend we are not engaged in an act of mass suicide, one that will come to its full and, by then, all too obvious, conclusion in our grandchildren’s, or our great-grandchildren’s, lives.

“It’s just common sense.” Whenever my mother said this, she seemed to imply that this down-to-earth form of intelligence was an attribute only of common men and women – ordinary people who could navigate the real world more adeptly than those who were born with silver spoons in their mouths or who have gotten so educated that they are no longer capable of understanding the basic facts of life. That’s an appealing thought, one I would like to be true, because ordinary people need just such an advantage to stave off the efforts of those who stand to gain more wealth and power by concealing and distorting the facts.

These forces want us to believe there is no threat to our environment, and therefore no threat to us. They are adept at manipulating us into thinking the only real danger is to our financial futures if we heed the environmental warnings.

The fact that such greed is rampant and determined to keep our eyes closed should be all the reason we need to open them wide.